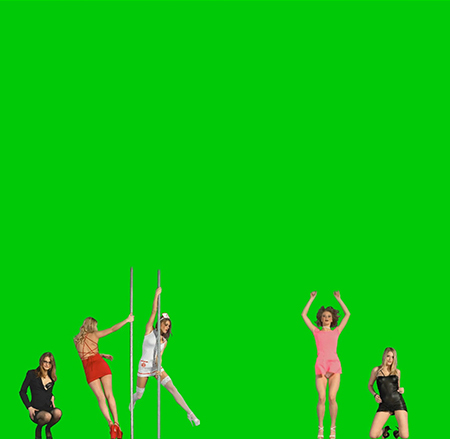 One of Cortright's primary conceits — or backstories, if you like — is the adolescent girl with, in addition to the unicorn and rainbow posters in her bedroom, access to an infinite digital fantasyland, including all the virtual hotties she might need to populate it. This is where Cortright's work reaches its intriguing climax: when the playthings of the girl-in-the-bedroom avatar equally become the playthings of the viewer. And as much as these virtual strippers — the titular stars of "NIKI, LUCY, LOLA, VIOLA” — may swiftly be contextualized into the history of the male gaze, from Manet (“Olympia") to Duchamp ("Étant donnés") to Lisa Yuskavage (name it, she invites it). Cortright is tapping into a more holistic cross-set of viewers, where the titillation, as with your typical mass-consumed GIF, is equal opportunity. In other words, there's something of a meta-titillation going on, or perhaps a double entendre of titillation, in which a viewer's neurons are engaged and massaged in the way that GIFs or viral videos are shared and consumed in mini-escapist fashion. Even at their most suggestive Niki, Lucy, Lola and Viola, as we take them in in this abbreviated form, are only teases.

Based on my advance look at the material, in the Flash animations the virtual strippers will descend from (and/or ascend into) the sky into clip art fantasy-scapes with elephants and horses in one and seagulls in another. A literal green screen will showcase a group of these figures performing their excerpted GIF-size routines in concert. They look to be fun in the mesmerizing form of the Flash animation. It should be noted that these animations, and needless to say the animated 'paintings,' are not for mass consumption, as her YouTube videos are. As much as Cortright's work has been written up as part of the digital art/selfie culture, the work here is high art with a capital ‘H.' The YouTube videos are in a public platform that lends a certain street cred to her oeuvre. But you won't find any of these Flash animations online. The related digitally produced paintings are enjoying a level of market interest that may even be comparable to the realm occupied by some of the more notorious male members of the young market craze club. Lack of availability, hardly for the first time, apparently helps drive notoriety.

Devil's advocate arguments would note the numerous precedents for this form of 'digital painting’ — or the 'painterly digital,' if you like — from Jeremy Blake to Jason Salavon to Paul Chan to Cory Arcangel. But one could also note that they're all men, and that men dominate this niche. Cortright employs these newer mediums more as a given than as some kind of technological cutting edge; part of her bio shtick is that she grew up with the technology and it's as familiar a language to her generation as traditional media were for old school easel painters. It's fitting that in carving her own initials into this arena, Cortright mines her source material with a proto-feminist savvy, marshaling the stripping trade into a now-overwhelmingly familiar package (the GIF and its cousins). But the innovative factors of this new media — which of course by now are no longer so new — still tend to be emphasized in appraising the work. The challenge is now for the work to distinguish itself on its own terms, as opposed to leaning too heavily upon the crutch of the novelty of its spillover into the mass-consumed GIF culture that swirls around its virtual aura.