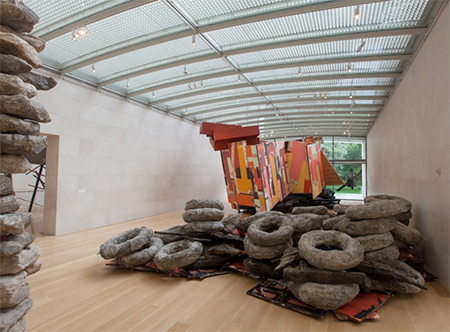 Phyllida Barlow's mammoth site specific installation, “Tryst,” dominates the galleries in what is quite possibly the most ambitious exhibition presented here to date. The massive work animates and interacts with the building in original and captivating ways that touch on the precarious and ephemeral nature of life shared in a multicultural society. After a long and distinguished teaching career at the Slade School of Fine Art, Barlow (b. England 1944) retired from that role in 2009 to devote herself strictly to making art.

Barlow is known for an aesthetic vision that acts as a critique of monuments, permanence and the notion of origin. Her materials range widely from wood to plaster, fabric, concrete and more, often colorfully painted and arranged on a massive scale on site. Once the exhibition ends, the work will be taken apart in its entirety and re-purposed for future shows. This notion of a tension between the ephemeral or fleeting in the face of intense physical presence and overwhelming scale identifies her art with the ebb and flow of time, the rise and fall of civilizations. She approaches installation design by spontaneously responding to how viewers will walk through, beneath and around these assemblages of artfully arranged ruins.

The first impression when seeing the work from the street outside through the museum windows is all weight and solidity. Walking into the main entrance, the installation immediately becomes an obstacle course of gigantic crates supported by wooden-like stilts. These crates force the us to look upwards to notice they almost touch the ceiling. They seem to move and tilt towards the exit leading to the garden. Titled simply “stiltedcrates," they are a mixture of lumber, polystyrene, steel and cement. We experience the work as a massive shift in scale and motion until a peek into the innards of the rectangular forms reveals an open bottom where the stilts and their fasteners are clearly visible, opening up the structure, de-centering the mass, and deliberately undermining the original impression.

The installation in the next gallery presents her critique of monuments and is a perfect example of the precarious nature of this body of work.  Titled “hangingmonument," a wrapped statue hangs as if from a crane, the scattered remains of a pedestal beneath. It looks like it would weigh several tons, though by now we suspect that it’s probably hollow. The image reflects Barlow's view that there are too many monuments in the public sphere that probably should never have been erected in the first place. In reference to this piece she referred to her admiration for the films of Russian director Andrei Tarkovsky, in particular his film “Stalker." In this movie the camera glides over, and through, the sculptural landscape of a future world, much as Barlow gets us to interact with her structures. It's a perfect metaphor.

As we explore each of the rooms from multiple vantage points, it turns out that all reveal a similar underbelly or opening that exposes the various constructions' latticework. The appearance of density is pure artifice, fooling the eye to see one thing but finally exposing itself for what it really is. What begins as a deception also allows us to seize on how her work quite theatrically operates its levers of pretense. We begin as conventional audience members, but Barlow takes us backstage.