“Getting” Abstraction. Or Not
Editors’ Roundtable
Column by Richard Speer 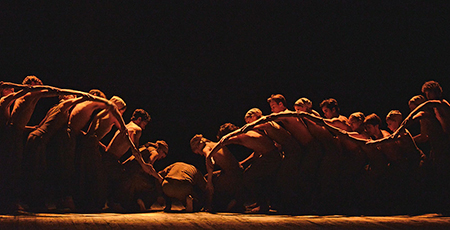 The mantra is as tenacious as it is tedious: “My first-grader could do that!” Since the advent of non-objective painting more than a century ago, the lay public has consistently clung to an inability or unwillingness to comprehend and appreciate the ideas and economic valuation of abstract art. It comes out in everything from the first-grader bromide to Morley Safer’s skeptical takedowns of art fairs on “60 Minutes” and “CBS Sunday Morning.” For those of us who care about the humanities and devote our lives to its concerns, this enduring dubiousness can be crazy-making.

The phenomenon was crystallized for me recently, not by an art exhibition, but a dance performance. London-based choreographer Akram Khan’s “iTMOi (in the mind of igor)” powerfully re-imagines Stravinsky’s “The Rite of Spring.” It’s an allegorical narrative about an imperious queen who, after ordering a human sacrifice, is dethroned by a cunning ingénue. A simple enough story. But just before the piece concluded, something inexplicable happened: The action stopped, leaving the stage bare except for a fearsome, horned specter, naked to the waist, who methodically swung a golden orb around and around on a rope in a broad circle. A metallic swooshing sound reverberated each time the orb hurled outward toward the footlights and back again. The audience scratched its collective head. What was happening? Where did the narrative go? In this enigmatic coda, dancers embodying characters representing archetypes had ceased doing ascertainable things, leaving us with only the suggestion of a planet’s revolution around the sun. Afterwards    it occurred to me that the choreographer, having duly plotted the characters’ tribulations, had zoomed jarringly out to the level of the cosmic, to illustrate the inconsequentiality of human action in the face of the immutable (and amoral) laws of physics. The narrative, in other words, yielded to the abstract.

Why is such a paradigm shift so difficult to grasp? We have much less trouble applying a pastor’s parable to our own lives. Even the most musically unsophisticated among us grasps that a minor key sounds sadder or more sinister than a major key. We can insert an “x” into an algebraic equation and know that it stands for a quantity yet to be determined. But plop most Americans down in front of a painting that is not a landscape, portrait, or still life, and you encounter an ingrained resistance that digs in its heels, then digs them in deeper. This is an epistemological abdication and it is tragic. Without a healthy curiosity about abstraction, you cut yourself off from one of the great cultural trajectories of the 20th Century. You view a post-1918 Mondrian painting only as a hodgepodge of squares and rectangles, not as a poignant dialectical reconciliation of male and female, land and sea, metropolis and pastorale. You are unable to see Adolph Gottlieb’s “Burst” series as stand-ins for post-H-bomb angst; or Joan Mitchell’s creamy études as synesthetic distillations of Proustian memory; or Hans Hofmann’s push/pull as a battle royal between the second and third dimensions; or action painting, tachisme, and Gutai as the unhinged ego let off-leash and running amok. And that’s just for starters.

One of our most elemental human characteristics is our capacity to associate a shape, object, or process with a related but different referent.  Through symbolism and metonymy we rise from perceptual thinking into the realm of the conceptual. Abstract art could function as a teaching tool for young people bridging this chasm, were it not so widely perceived as an exotic trifle of the cognoscenti. It would be nice to think, given the assimilation of Modernist visual tropes into mainstream design and advertising, that the American public would become increasingly conversant in abstraction with passing decades. But given the attitudes I encounter routinely beyond the circles of artists, gallerists, curators, collectors, or critics, I’m not holding my breath.