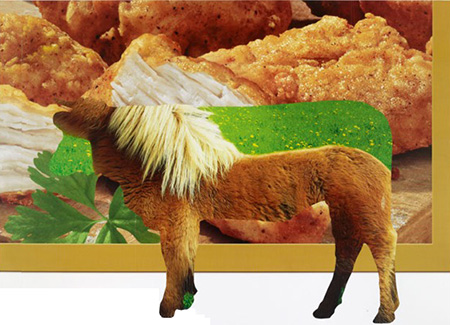 Albert Oehlen’s recently opened New Museum exhibition in New York, “Home and Garden,” illustrates the renowned artist’s career-long commitment to experimenting with painting. In Oehlen’s Chicago exhibition, however, there is no paint to be found, but his layering, commingling of abstraction and representation, and unfettered experimentation remain. “Rawhide” is a body of work that is all about collage. In this series of large paper on canvas works, the artist appropriates billboard signage, cutting out the contour of a cow from one sign and nestling it into a void of the exact proportions of another. The puzzle-pieced effect in the graphic compositions alternately hides and reveals the bovine figure, its outline visible amongst fragmented images of chicken fingers, busty ladies and Swiss army knives.

In the smaller pieces, the dark silhouette of the animal stands lazily, juxtaposed over full scenes of found imagery: the Sahara, a painter’s studio, Duchamp’s “Bicycle Wheel,” and an 80s-era Hulk Hogan. While the works may hint at some critique of capitalist materialism or the art historical canon, what resonates most is their absurdity. At age 60, Oehlen has still got a nonchalant attitude when it comes to the traditions of painting. Who needs profundity when a joke will suffice? In “Rawhide” the joke is a good one.