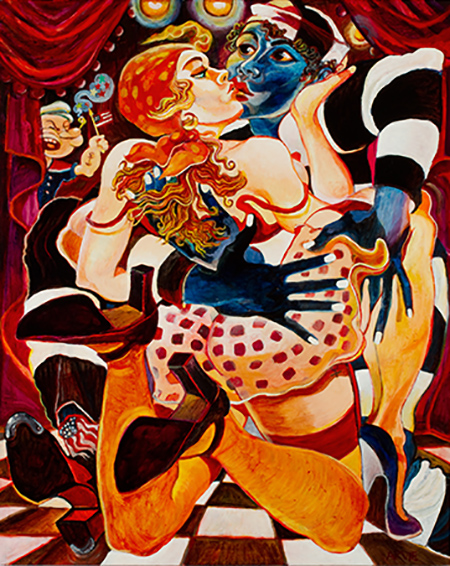 In a suite of 30 paintings from 2014 and 2015, collectively titled “Tight Rope,” Arvie Smith deploys an array of archetypal images to address the ongoing specter of racism. Smith excels at double-coding, turning pernicious racial stereotypes into parodic and visually seductive vignettes. Signifiers such as watermelon (in “Solid Waste”), fried chicken (“Blondie”), a wet nurse (“Honkie Tonk”) and black men romancing white women (“The Kiss” and “Bojangles Ascending the Stairs”) crowd together in dense, chromatically bold compositions.

Like the stereotypes they skewer, Smith’s style is cartoonish, loosely rendered, and often garish. Perhaps the exhibition’s most compelling work, “Hands Up, Don’t Shoot,” shows Aunt Jemima holding her hands in the air, a plate of pancakes in each hand, in front of a taped-off crime scene. In the background stands a Ku Klux Klansman. Ominously, a cameraman records the tableau under stage lights. It is a chilling mélange of symbols, drawing a connection between minstrelsy and deadly police force — and yet, formally the painting is full of brashness, even joy, pulling the viewer into a complex, complicit relationship with the disturbing subject matter.