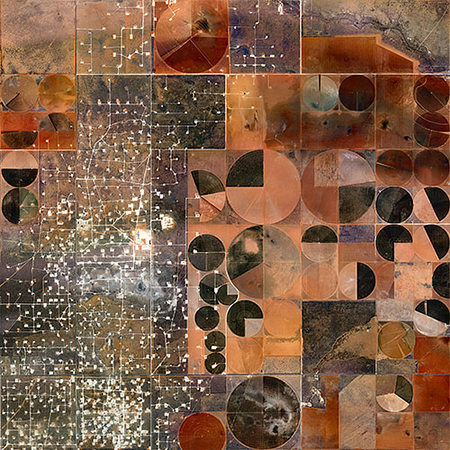 It is no surprise that an artist would exploit the all-seeing capabilities of Google Maps, that vast downloadable catalogue of satellite imagery spanning every terrain on Earth. Los Angeles-based Daniel Leivick zeroes in on arid landscapes, collecting and seamlessly collaging the peculiar views that the desert elicits from on high. The collages then become large-scale archival prints that suggest otherworldly places and concepts. In fact, they can be a bit disorienting: a bombing range resembles the crosshairs of a rifle; an oil field looks like pie charts and circuit boards; and the white expanse of a salt flat seems like nothing special until Leivick adds a patchwork of “roads” and swirls, along with delicate lines to suggest a starburst.

The series is titled “Heliopolis,” meaning “sun city,” which denotes the place where the mythical phoenix died and was reborn. Many of the works have particular resonance in the Southwest, where the human intersection with the desert is often controversial. That comes to the fore in “Encroachment Small #3,” where a dense housing development forms a perfect quadrant in an otherwise barren landscape. “Markings #2” is a complex piece using the faint image of what seems like the mysterious Nazca Lines of Peru, along with an aerial view of trees dotting a landscape. The God’s-eye view in these pieces and others provokes thought not only about destruction and rebirth, but also the tension between the easily recognizable and the inscrutable.