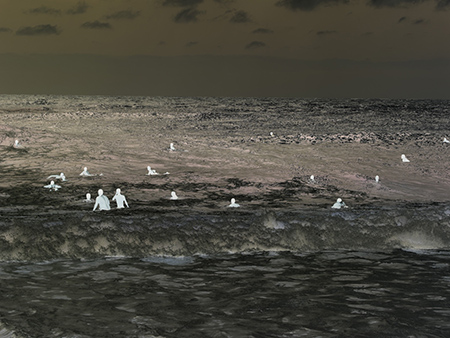 The seemingly contradictory aims of visual pleasure and social commentary are both served in the photography of Richard Misrach, who has explored both scenic landscape and sociopolitical analysis, sometimes separately, at other times simultaneously, for four decades. "Being(s)" is a mini-retrospective of his work, with fourteen prints, most of them large and in color, and made over the past fifteen years. Viewers who saw Misrach’s show at the Oakland and Berkeley Art Museums a few years ago will note the absence of images of devastations from the Oakland hills fire, but those who saw his New Orleans show at the Cantor Arts Center will recognize “Night Fishing Near Bonne Carré Spillway, Norco, Louisiana“ (1998), a striking image of a man at water’s edge, frozen in time, watching an oil tanker blurred by motion passing above and behind.