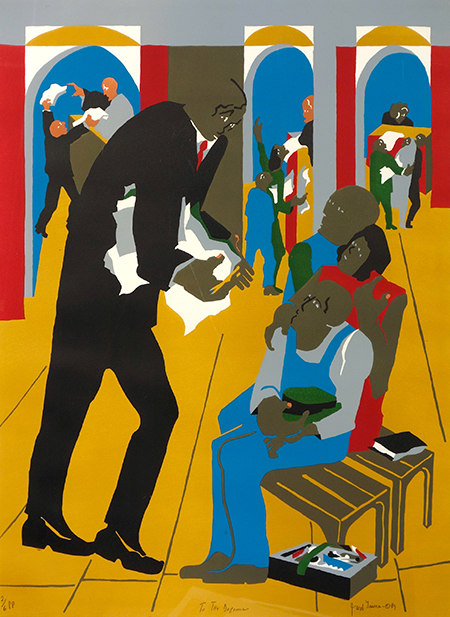 Jacob Lawrence, "To the Defense," 1989, lithograph on Arches paper, 32 x 24". Printed by Kent Lovelace, master printer at Stone Press Editions, Seattle. Published by NAACP Legal Defense and Educational Fund on the occasion of its fiftieth birthday.

Was Jacob Lawrence the greatest of all 20th century African American artists? Overshadowed perhaps only by Romare Bearden, Lawrence (1917-2000) paid a price for a comparative degree of neglect in his lifetime by the New York art establishment: he moved to Seattle in 1971 to take a teaching job at University of Washington and never moved back. As the current survey of his prints, “Jacob Lawrence as Printmaker” attests, the isolation of the Pacific Northwest led to his greatest, most prolific late output, the lithographs and silkscreens.

Timed to coincide with the Museum of Modern Art showing of the “The Migration of the Negro” series (1940-41), Sam Davidson and curator Shayla Alarie have assembled 20 multiples dating between 1972 and 1997, including samples from the celebrated “Toussaint L’Ouverture” series (1986-1997) that honors the Haitian revolutionary and patriot who died in a French prison in the Alps in 1802. Nine out of the 41 from the series are on view. They typify Lawrence’s unique ability to adapt strict cubist figuration to social and topical subjects, the main reason UW professors Spencer Moseley and Wendell Brazeau hired the New Yorker. His work was like that of their French graduate school professor’s in Paris, Fernand Léger. Thus, by coming to Seattle Lawrence was linked to European modernism as well as the vaunted Harlem Renaissance.

Battle scenes of the Haitian Revolution are depicted vividly, all within the artist’s strictly abbreviated forms, limited palette (red, blue, brown, green, yellow), and radically foreshortened pictorial space. For example, “Deception” (1997) is an unusually timely piece: white soldiers apprehend and stab L’Ouverture after lying to him about ceasefires. Referencing the rejection of Napoleon’s efforts to restore slavery in Haiti, “To Preserve Their Freedom” (1988) shows male and female island residents taking up arms against the French invaders. “Strategy” (1994) shows rebel leaders writing the Haitian constitution on January 1, 1804. These are iconic images that are more bitterly ironic and sad than ever. “Contemplation” (1993), with L’Ouverture seated at his desk, vacillates between representation and abstraction, its strong vertical chair-poles and candles boxing in an image of the great leader lost in thought.

Another legendary Lawrence series, “The Amistad Revolt,” (1989), commissioned by Aetna Life Insurance Co., offers his interpretation of the slave ship mutiny of 1839, an important rallying point for early abolitionists. “Revolt on the Amistad” (1989) is a formally complicated piece, all the more so for the complex, violent scene it depicts. At first, it seems a jumble of clashing diagonal lines. Up close, however, a dazzling scene of death unfolds. Knives, ropes, waves and masts are recruited as formal organizing principles to support the killing and take-over of the ship. Lawrence is at once a populist and a sophisticated elitist in these works, creating stories for the ages that would not wear out visually but slowly discharge their terrible message over time. No matter how many times one sees some of Lawrence’s historical scenes, their modernist construction forbids them from becoming overly familiar or tiresomely obvious.

Lawrence took the job in Seattle even though Pratt Institute of Brooklyn, NY, made a counter-offer with a deanship and more money. In return, he enriched the Pacific Northwest art scene with his presence and, for the first time, included figures of other racial and ethnic groups. There is a white man at the base of “Workshop” (1972), done only a year after the New Yorker’s arrival.

With violence in the streets again and young African-American men frequently singled out for police harassment, attention to our unjust system of incarceration is focused even on the Seattle Police Department, which is currently under federal review. “To the Defense” (1989) sums up where we are today. Commissioned by the NAACP for its fiftieth anniversary, the lithograph shows black attorneys speaking with young men’s families outside the courtroom. Another work, “Celebration of Heritage” (1992), treats Native Americans in a bright, shimmering composition of ceremonies and dance rituals.

The subject of two biographies and catalogues raisonnés of prints and paintings, Lawrence was never forgotten or left out even after his departure from New York. However, the story of his long stay in Seattle and how the city and job freed him up to enjoy a substantial, even brilliant period of work after his glory years in Harlem is usually subsumed beneath the New York narrative. Seeing the prints in Seattle where they were inspired may not equal the majesty of seeing “The Migration of the Negro” at MOMA, but it is a close second.