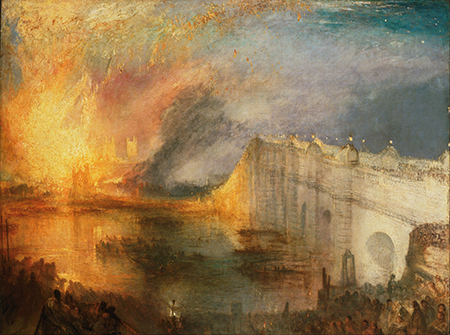 JMW Turner, "Burning of the Houses of Lords and Commons, October 16, 1934," oil on canvas, is currently on view at the Getty Museum

During the last sixteen years of his life, when he produced some of his most innovative work, the audacious British painter JMW Turner found inspiration in waterways and the luminous atmosphere rising from them as his theater for drama. Inspired by poetry produced by flamboyant peers such as the Romantic poet Lord Byron, Turner typically launched his work by attacking blank canvases with veils of thin oil paint, applied with rags in long, nimble sweeps of his arm. This set the stage and overall tone for the buildup of more detailed imagery, applied with brush, pallet knife or even the artist’s fingers, with a final topping of varnish or beeswax to amplify glistening highlights.

Turner’s hands on, experimental method of working was remarkably successful, particularly in paintings such as his version of the fable of “Regulus” and scenes from Venice, Italy, where he successfully blurred the boundaries between water and air. Watercolors became the ideal media for sketches Turner made during his travels a well as larger finished works. This exhibition includes 27 watercolor paintings, along with 35 oils, grouped thematically. Among the outstanding works, many on loan from the Tate’s collection, are oils including “The Burning of the Houses of Lords and Commons,” and “Whalers,” and watercolors such as “Venice at Sunrise from the Hotel Europa, with Campanile of San Marco.” Several are paired with appropriate poetic texts, Turner’s own poems or poetry like the following excerpt from Byron’s “Childe Harold’s Pilgrimage:” “The moon is up, and yet it is not night. The sun as yet disputes the day with her”