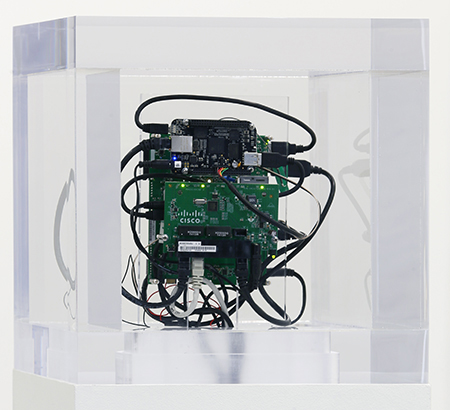 Technology affects every aspect of how we live today, whether we like it or not. It’s a little of both, of course: we adore the power and elegance of our sleek new gadgets, but risk losing our humanity to the ubiquitous screens and pointless chatter, as well as the prospect of humankind being superseded in the not too distant future by our artificial-intelligence brainchildren These themes are central to dystopic science fiction films — is there any other kind? — and continue to address that old cliché: are there some things Man was not meant to know? Trevor Paglen thinks not.

Paglen's technologically sophisticated work, the product of a trained geographer and photographer, has focused on the brave new world of electronic surveillance for years. Growing up in an Air Force family, he is personally familiar with military culture; fascinated with the secret bases in Nevada from which drones are launched and directed, he has photographed them from up to fifty miles away, employing powerful 3500mm combinations of telephoto lenses and telescopes. Such heavy, expensive equipment has real-world limitations. The image degradation caused by convection heat waves, windblown dust, and the optical limitations of his equipment — what he calls the inverse relationship between magnification and accuracy — are for Paglen a part of his subject matter: the Heisenberg Uncertainty Principle, that Catch-22 of scientific observation, applied to his practice of artistic surveillance, of watching the watchers (which, he allows, is still possible in the United States).

Large-format color photographs are here paired with maps collaged with both official and secret documents, an interactive internet sculpture and an aerial video on the theme of the unseen infrastructure of the American surveillance state. Paglen: “The metaphors we use to understand mass surveillance and the Internet tend to be very abstract, and often mystifying. Words like ‘cyberspace,' 'the cloud,' 'the information superhighway' perpetrate an image of the Internet as something placeless yet ubiquitous, immaterial yet omnipresent. These metaphors are deeply misleading.” Paglen shows us, without editorializing — he is too thoughtful for anti-electronic histrionics — the findings of his research.

The three large photo-and-map diptychs depict sites on the east and west coasts of the United States and Germany where undersea communications cables connect with onshore communication hubs. The detailed titles reveal what lies beneath or behind the placid, even touristy images of small boats on calm water and crowded sandy beach: NSA-Tapped Fiber Optic Cable Landing Site, Mastic Beach, New York, United States; NSA-Tapped Fiber Optic Cable Landing Site, Point Arena, California, United States; NSA-Tapped Fiber Optic Cable Landing Site, Norden, Germany. No voracious sharks or stormy seas obtrude themselves into these scenes; the full meaning becomes clear with the map halves of the diptychs, maps containing collaged photos, charts and diagrams (at least one of them, labeled TOP SECRET/COMINT, redacted) of the facilities operating behind the scenes, in a scientific-display format familiar to aficionados of land art and conceptual art: just the facts, ma’am.

Paglen, who is familiar with the military and geographic origins of what we now consider classic Western landscape photography, is interested in “the relationship between aesthetics and power and technology and ideology.” These images might be seen, despite their beauty,  as sobering contemporary versions of Breughel’s Fall of Icarus, that mythological warning against hubris memorably described in Auden’s poem: “and the expensive delicate ship that must have seen / Something amazing, a boy falling out of the sky, / had somewhere to get to and sailed calmly on.” Our Heisenbergian inability to see and understand “the limitations of one’s own vision,” is embodied in the work. Paglen: “Usually it’s impossible to tell what you’re looking at or even that you’re looking at anything in the first place.”

"GCHQ Surveillance Base, Cornwall, UK," a video shot from a helicopter, depicts a huge circular building dedicated to surveillance. The camera circling the building, zooming in and out, reveals both the huge scale on the facility and its human workers, walking to and fro in the tree- and parking-ringed carousel. "Code Names of the Surveillance State" is a video with words slowly scrolling down, interminably, of thousands of code names of security operations, with such monikers, surreal as rock band names, as BYZANTINE RAPTOR, CAUTIOUS CROW, CHEESY WEASEL and CHAOTIC STORMTROOPER. "Autonomy Cube" is a functioning electronic work made in collaboration with Jacob Appelbaum. Comprising circuitry encased within a Plexiglas cube, this work connects with the computers and cell phones of visitors, allowing them to send messages through a computer network called The Tor Project, which encrypts the messages and bounces them between various computers (as in the film”Sneakers"), enabling the senders to hide their identities and locations.

If Normcore art viewers are somewhat baffled by the lack of aesthetic interpretation or expression in such work, the issues that it raises are nonetheless too relevant to ignore. Paglen documents the advent of an era when machines transcend human vision and  make images for other machines to interpret. It’s here and it's now, like it or not, my carbon-based peers.