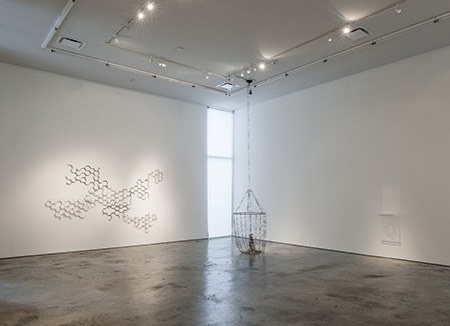 Uruguayan sculptor Pedro Tyler continues to work with an assortment of rulers. His fascination with systems of measurement, including stainless steel rulers and metal measuring tapes, began around 2000. This show includes several large wall pieces and two kinetic sculptures, one of which is located in a small hallway off the main gallery. “Aun de Pie (Still Standing)” makes a ringing sound that draws the viewer closer to discern its source. A motor mounted on the ceiling is connected to a chain made from pieces of metal measuring tape fashioned into a daisy chain. This, in turn, is connected to a steel tube that rests on the concrete floor. As the motor spins, it turns the chain, but the weight of the tube resting on the floor prevents the chain from spinning freely until the accumulated torsion lifts the tube off the floor. Once suspended, the tube unwinds, spinning until it grazes the floor, producing an acoustic sound akin to a Buddhist bell. Another moving sculpture located in the main space is “Deriva (Adrift),” which resembles a chandelier and revolves on an off-center axis. The chains that make up the bell of the chandelier emit a tinkling noise as they move across the floor. Both pieces provide meditative “music” for viewing the show.

According to Tyler, the current work is a result of his interest in “sculpture as a carrier of knowledge” and “the history of philosophy as a record of men’s fears and anxieties.” He is intrigued by philosophers of the Enlightenment such as Descartes, Spinoza and Leibniz. Tyler references Descartes’ “chain of reasoning and rational deduction” in which one idea is linked to another, and several of the sculptures are made from chains of measuring tape twisted into the mathematical symbol for infinity. The artist views philosophy as a “record of men’s fears and anxieties” and the Enlightenment as an attempt to bring mankind out the darkness and into the light of reason. He titles the show “Extensa,” which means extensive or immense, to link it philosophically with infinity and metaphorically with the idea of a greater being. Tyler alters everyday objects so that they can be apprehended in a new way even as they reference intellectual models that are centuries old. The implication is that philosophical ideas and human emotions cannot be measured.