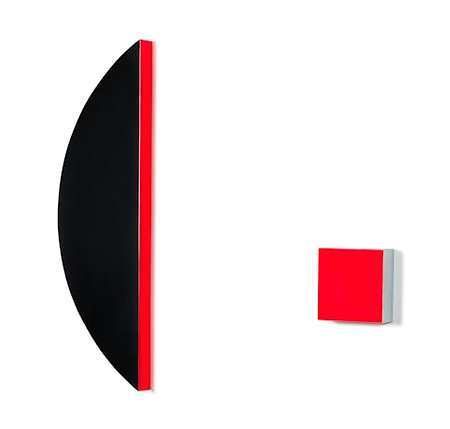 Simplistic, geometric sculpture comprises the work of Elliott Norquist, a New Mexico-based metal sculptor working in painted steel. “Gratitude" is some type of homecoming for Norquist, who has not shown in Santa Fe for nearly a decade. The amount of work in the exhibition is certainly an indication that while Norquist has been out of the public eye for a some time, he has diligently continued to make and perfect the elegant wall pieces seen here. The sheer quantity of work is impressive and implicitly suggests that this exhibition was long overdue.

The work feels directive; it pushes the viewer’s eyes toward somewhere else in the gallery through a curve in the metal or points elsewhere. While mounted on the wall, the work feels more sculptural and dynamic through this phenomenon that directs one’s eye to other work in the gallery. In this sense it adds up to vibrant, minimal pieces that create an ebb and flow of color and shape. The pieces are often comprised of two or three components that have some spatial communication. A purple curve abruptly breaks off into a triangle, a black crescent shape, shadowed in red is paired with a red square creating subtle optical effects.