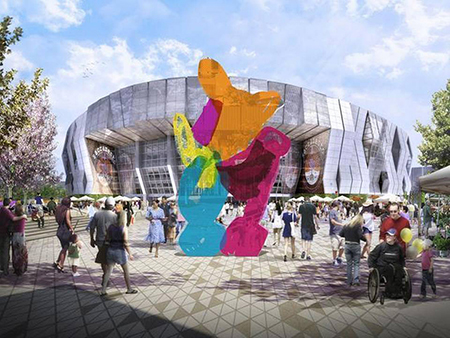 Jeff Koons, "Piglet," stainless steel, 18 1/2 feet tall. Rendering of the sculpture to be sited at the new Sacramento Kings stadium

In this space, over the past year or so, I have been considering art critic Irving Sandler’s fourteen questions to art critics, published in the "Brooklyn Rail" in 2012. This week, Question 11: How has the enormous growth of the art world changed art criticism?

Those of us who remember the 1960s — and were indeed there, stoned hippies or not — are both excited and perplexed by the current art world, a half century later. The 60s were, of course, a period of cultural ferment, as Baby Boomers began to exercise the economic and social power that have dominated American culture for so long. (Barak Obama, born in 1961, could be said to be the third Boomer President, after Clinton and Bush2; whether Clinton2 continues that generational trifecta remains to be seen.) In the 1960s, art was still largely a cultural pursuit of the elite, and dominated by the idea that postwar America was the new Paris, the torch of cultural leadership having passed from faltering European hands to brash, boisterous capitalist utopians who would carry it into the future. Abstract Expressionist individualism was marketed by the CIA for propaganda abroad, and was Cold War orthodoxy at home as well.

The art-evolution gospel of the formalist critic Clement Greenberg was seen as (to employ a term he liked) apodictic, i.e., absolute and inerrant. This aesthetically circumscribed monoculture could not last, however. Pop and minimalism emerged and denied, respectively, the sacred status of the artist-priest and self-expression itself. Land art, performance, video, conceptual art, computer art and social-practice art redefined art practice from the making of precious objects by hand within a laboratory/studio to whatever the artist wanted it to be, following the revived Duchampian idea that intellectual content now superseded craftsmanship and mere retinal appeal. The past fifty years have brought us the multiplication of this idea — of The Idea, United and Triumphant — throughout a vastly expanded art world. That museums would be treasure houses of masterworks that had endured the test of time and remained relevant to each new generation of viewers was jettisoned, as was, indeed, the old, white, male connoisseuriate that supposedly created and guarded the canon. Art critic Jed Perl described the art world’s new operating system in a 2007 essay as “laissez-faire aesthetics”:

"The people who are buying and selling the most highly priced contemporary art right now — think of them as the laissez-faire aesthetes — believe that any experience that anyone can have with a work of art is equal to any other. They imagine that the most desirable work of art is the one that inspires a range of absolutely divergent meanings and impressions almost simultaneously … A painting is simply what everybody or anybody says it is, what everybody or anybody wishes it to be."

The notion that absolute truth does not exist, indeed, that human personalities are merely social masks that we construct and wear, derives from postmodernism, with its rejection of singularity and its embrace of "complexity and contradiction," in the words of one of its theorists, the historicist architect Charles Jencks. The enormous growth of the art world was in part due to this aesthetic leveling which embraces — erroneously, in my opinion — the artistic pastiche as a critique of the meaninglessness of life, past and present.

It is hardly surprising that art criticism should have been affected by this erasure of critical distinctions and concern for immediacy and  spectacle. However, art without compelling aesthetic value can hardly be said to be art at all. (If everything is art, nothing is.) Art criticism that sanctions such status-quo relativism (even interlarded with art newspeak) is not criticism at all. Good art criticism and good art mutually and respectively create meaning (rather than extolling meaninglessness). This is vitally important if art is not to degenerate, as a portion does, into pretentiously pointless fun and games.

Art is a mirror of society. You may remember that George W. Bush was once described as a postmodern president because of his administration’s belief that being "faith-based" replaced the old journalism paradigm of being "reality-based." The corporate monetization of the art world (which is completely unregulated, an Ayn Rand/Rand Paul utopia) is a microcosm of American society since Reagan’s Morning in America, a false dawn if ever there was one. The recent decision by the City of Sacramento to spend $8,000,000 for public art of dubious merit that happened to have a big brand name attached, and would undoubtedly launch 10,000 selfies, is symptomatic of our loss of faith in art’s meaning and relevance, apparently replaced by cultural-tourism Babbittry. Let’s shake off our inertia, art lovers, and demand more than pernicious disinfotainment, whether it comes from Fox News or the trendy, monied beau monde.