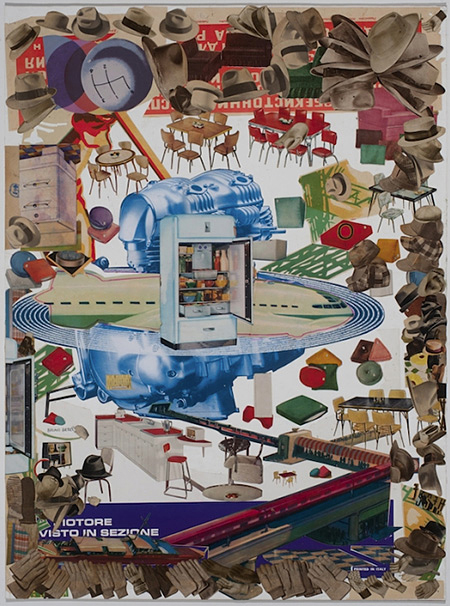 Searching out common themes in Lance Letscher’s work is both captivating and challenging. Most of these intricate and remarkably well-executed collages include references to transportation and period shoes, hats, and gloves. The transportation-dominated pieces run the gamut from clipper ships and trains to airplanes and rockets. “Anxiety Clock” includes the partially obscured phrase, “[T]ransportation creates new wonders” and depicts two airplanes flying across the surface of the picture plane. The large “Greatest Dancer in the World” is a kaleidoscope of hundreds of shoes, including men’s dress shoes, lady’s pumps, penny loafers, and other types of footwear. They are arranged in circular patterns, like the petals of a flower — in one, they circle a watch, in another a ring of hands around a clipper ship. “Why I Eat at Night” focuses on men’s hats of all periods and styles.

Once we get past the meticulous, labor-intensive first impression, we notice their elegant design and narrative qualities. In a group show at the gallery two years ago, most of the artist’s pieces were dominated by letters and words; now these elements, while still present, play a lesser role. In “Anxious Astronaut,” a man’s head floats in the center of the composition, his face distorted with worry. Russian letters on a red ground reference the space race between the U.S. and the U.S.S.R. from 1955 to 1972, and elements of rocketry comprise the background, with gloves and other objects tucked here and there. “Don’t You Dare” juxtaposes ice cream cones and frozen confections with shoes and hats, as well as a matching set of luggage, complete with hat box and train case. Accumulations of objects are present throughout the show: furniture, bedding, fruit, animals, clocks and skulls.

Perhaps it is the nostalgic nature of the objects that Letscher culls from vintage printed sources that makes his collages so appealing. We cannot help but superimpose our individual associations on the work and, given their richness, relate to them on many different levels. But Letscher has an uncanny ability to create coherent narratives from many disparate elements. This talent is both mysterious and powerful, and for us endlessly fascinating.