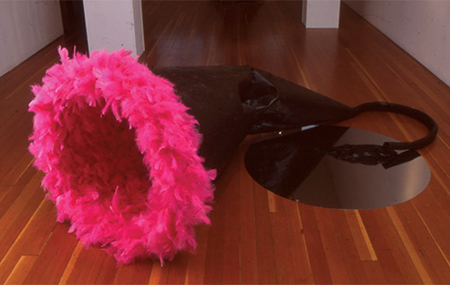 As of April 1 I’ve ended a nearly thirteen-year tenure as visual-arts critic at Willamette Week, the alternative newspaper in Portland, Oregon, in order to concentrate on magazine writing and book projects.  When I announced my impending departure via Facebook, I found myself flooded with an unexpected outpouring of nostalgia from readers concerned that my leaving signaled “the end of an era” in local arts coverage. On the local arts blog, PORT (www.portlandart.net), curator and writer Jeff Jahn fretted that Willamette Week might farm my duties out to a haphazard rotation of under informed freelancers. These reactions left me reflective on the changing role of the local art critic, especially at alt-weeklies.

I started at Willamette Week in 2002, which still basically felt like the late 90s. And working at a feisty, muckraking alternative paper at that time felt like being John Cusack at Championship Vinyl, the esoteric record store in the movie “High Fidelity.” There was a scruffy esprit de corps among a cadre of writers with strongly idiosyncratic voices: Caryn Brooks, who wrote a sassy food column called “Miss Dish;” Steffen Silvis, an imperious theater critic who could easily have been played by a young George Sanders; David Walker, a film critic whose tough opinions occasionally landed him in barroom brawls; Byron Beck, who wrote an often controversial column about gay life entitled “Queer Window;” Kelly Clarke, who covered dance with prose as nimble as a plié; and myself on the visual arts beat, pulling no punches and trying perhaps a little too hard to inject a romanticized, gonzo sensibility into the too-often staid realm of arts writing.

The paper was still thick back then, with a sizeable classified-ads section. Its nascent website was practically an afterthought. Back then, each month I generally wrote an artist profile or Q&A, four reviews, one 1,000-word-long feature, and complete gallery listings. That’s a staggering amount of ink compared to the one review and fifteen short exhibition blurbs per month I ended up writing when word-counts — and the paper itself — contracted, a byproduct of Craigslist usurping classified ads.

As time went on and writers such as Silvis and Beck left the paper, their highly individuated prose styles were not replaced with similarly hyper-opinionated voices. Arguably, as the drive toward higher website traffic increased, the paper’s once-heterogeneous gestalt gave way to a broader, less prickly, more user-friendly “house style.” In many ways, as the longest-serving arts writer of this period, I was the last holdout of the ancien régime. And yet, despite the continuity my coverage offered, my writing did change in response to the tectonic shifts happening in print journalism.  With less room on the visual-arts page, I wound up writing a greater number of positive reviews than negative. With only so many inches of newsprint available, I thought it a better use of space to praise the praiseworthy than to impugn the impugnable. As a result, my criticism as a whole probably lost some of its initial bite.

Further, the fifteen blurbs I wrote per month, at only 100 or so words apiece, became exercises in distillation. Just try to identify a show’s thesis, describe materials and process, and offer an informed opinion on the show’s effectiveness in 100 words. It’s a quixotic assignment in telescoping content, and on the face of it, my writing sometimes turned glib. Finally, shrinking word counts has led to intense competition among artists to get their shows written about at Willamette Week, other alt-weeklies and the daily papers that remain. Here in Portland, the ratio of exhibitions up any given month versus the shows that receive even the slightest critical mention, is about 60-to-1. This isn’t fair to readers, and it certainly isn’t fair to artists and their galleries.

But this is our time. Arts blogging, which I should have done more of, is partially filling the void. Online there are no inherent limitations on wordage, and since anyone can opine online, criticism has become more democratic, if more diluted. I have a feeling we’re in a transitional period now, a figuring-it-out stage after which a demand for strong, credentialed authorial voices in journalism and criticism will return. What new platforms it will appear in — and who will pay for it — is anybody’s guess.