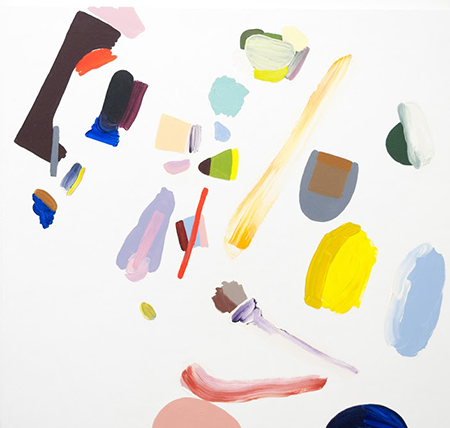 Taking over the space formerly occupied by the short-lived but curatorially formidable Nisus Gallery, Carl & Sloan makes a strong debut with the three-person show “Testable Predictions.” Helmed by two artists familiar to Portland gallery-goers, Calvin Ross Carl and Ashley Sloan, this exhibition suggests that the new gallery is poised to up the curatorial ante at the Disjecta compound in which it resides. “Testable Predictions" crackles with the kind of energy the artists are known for individually, which might be summed up as: sugar rush followed by slow burn.

Sculptures by Michelle Liccardo transmute metal, concrete, paper and paint into porous constructions reminiscent of multicolored coral. In Perry Doane’s silkscreen prints, shapes in deeply saturated hues spar with implacable expanses of white. Amy Bernstein’s oil paintings take up the now long-running question of whether painting is dead or thriving. With reductivist rigor she methodically sets forth the sundry brushstrokes of academic painting and Abstract Expressionism, as if in a scientific compendium. As they dissect and de-glamorize the idea of gesture, the paintings manage to avoid the tedium of pure exposition, thanks to a welcome dose of whimsy. In fact, although the show as a whole comes across as quite formalist, the prevailing lack of morose art-theory and the emphasis on popping color lend a spoonful of sugar to help the aesthetic medicine go down.