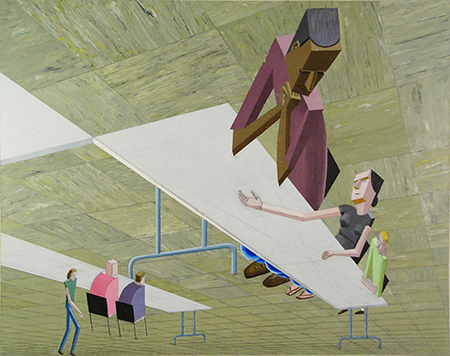 Mernet Larsen's blocky figures — which often look as if they've been brought to life using an old-school 3-D modeling program and then painted — loom large over each other and their environments. They are typically engaged in banal moments of intense contemplation: a handshake, lying in bed, sitting around a shared table at home or at work. If there's drama to be found, it's via the image more than the event.

In addition to the odd three-dimensionality of her figures, which frequently take on a sculptural trompe l'oeil quality without the saccharine novelty associated with the device, Larsen often applies a reverse perspective to her settings. Thus the figure, or part of a figure furthest away is the largest, and vice versa. "Sound in the Night," features a solo woman gazing toward the light coming through a narrow doorway. "Reading in Bed" depicts a couple, each lying in separate beds and in opposite directions, with the respective beds widest at the headboard. In “Salad" a woman holds salad tongs vertically at her end of the table, as if waiting for attention (and, arguably, serving as the subservient food provider — an implicitly feminist message), towers over her male companions, each holding a glass of wine, at the far (and shorter) end of the table.

Another painter who comes to mind that employs a reverse-perspective approach is Scott Grodesky; his is a looser, more amorphous application, and a goofier one. Larsen's precision in her invented spatial language comes off far more naturally by comparison. In terms of subject matter, perhaps the most fitting iconography for her own particular brand of space rule-breaking is that of the faculty meeting (Larsen taught for over 30 years at the University of South Florida, so she surely internalized their rituals, both psychically and visually).

The measured if not downright unending trials and tribulations of dialoging in the realm of bureaucracy is near perfect fodder for Larsen's classroom-scapes, in which long fold-out tables are inhabited by comatose colleagues enduring a pensiveness of the near-dead. In “Explanation" the folding tables are offset, even challenged, by a correspondingly reverse perspective linoleum floor, a dynamic that leads the otherwise passive colleagues to hurtle through space, as if being sucked towards a black hole with a very, very weak pull. One of the newer works, "Chainsawer and Bicyclist," takes not only a more surreal approach to content, there's also a greater reduction in form (with the front bicycle wheel depicted as a long, thin black band). And the reverse perspective is barely noticeable.

“Reunion" in which friends (presumably teaching colleagues, given the larger pattern) sit around a red-and-white checked tablecloth with pizza and beers, feels more classic, and ultimately satisfying. It's a world in which perspective shifts and wavers in a way that evokes the simultaneous connectedness and alienation that we're so often stuck in, whether at work or at play. Larsen's art validates the continued validity of painting by providing long and varied viewing, a visual contemplation that rewards thanks to a multi-decade commitment to her vision, one which sustains full maturity in this show.