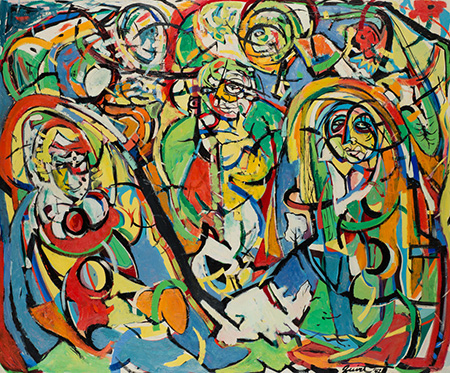 Anyone who has leafed through old art magazines realizes how tenuous art careers can be in a culture that prizes originality over solid achievement rather more than it should. The social surrealist works of painter Walter Quirt (1902-1968) in the 1940s garnered praise and attention — he and Jackson Pollock were tagged as painters to watch — but his name is largely unknown today, not through any fault of the work, but because he moved to Michigan for a teaching job just before New York Abstract Expressionism exploded on the world, rendering every other style obsolete. Art with any figuration, however modernist, or, deemed then just as retrograde, humanist or political themes, was relegated to museum storerooms, rarely to emerge. (Quirt’s work is in the collections of MOMA in New York, SFMOMA, the Smithsonian and the Whitney; two of his paintings will shortly go on view at the deYoung Museum in San Francisco.) After Quirt’s death, his work was kept in temperature–controlled storage. That archiving removed them from the market (and from aesthetic discourse), but it preserved them beautifully.

The works ln this show, which was assembled by independent curator Travis Wilson, accordingly, look amazingly fresh today; their social themes, expressed in packed compositions of crowded flayed figures, are newly relevant in the context of our current sociopolitical turbulence. Quirt’s eclectic approach reveals hints of Picasso, Miro, Masson, and Orozco that is evident in the seven major oils on view — "Separate Worlds" (1942), "Nature’s Children" (1942), "Shipwrecked" (1943), "The Crucified" (1943), "How the Rabbit Lost its Life" (1944), "The Damned" (1944) and "Compulsion to Anger" (1944). The influence of Pollock and Quirt’s friends Romare Bearden and  Stuart Davis (whose letter criticizing a Quirt show as being not quite up to the mark is on view) are also present. A catalogue with essays by Peter Selz and Travis Wilson that trace Quirt’s evolution from 1930s “Proletarian Artist” to 1940s socially engaged surrealist who verbally took Dali to task for his fascist leanings and denounced in his painting "The Crucifixion," “the growth of sadism within American society”.