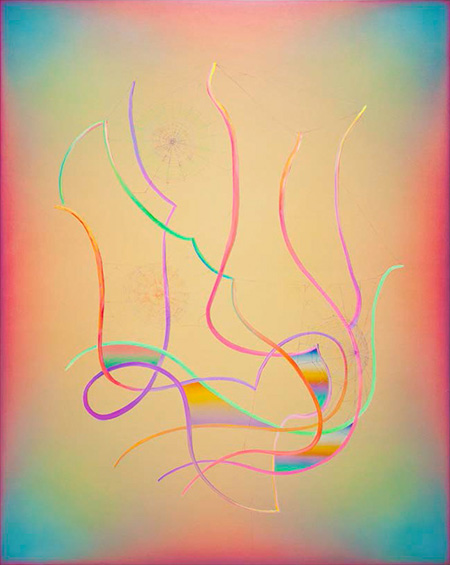 The way Dani Tull mixes painting, sculpture and installation makes for a mad romp through all kinds of interconnected but unrelated metaphors for developing consciousness. For this exhibit, entitled “From Enchantment to Eschaton” (words stretching from alpha to omega in differing belief structures), the artist tumbles together all kinds of allusions. Along the way he visits mind bending psychological states, tosses off bits of flotsam from America’s popular culture and warms up experiences from different points in time. Interestingly the eras and their associations often feel both familiar yet distinctly strange at the same time.

Tull’s paintings have a 60’s counterculture, stoner vibe. They frequently feature psychedelic rainbows of pastel color that serve as bright grounds for graphic, pop art style, or bear the mysterious image of thin branches of tie-dye colored line. Hanging delicately from these painted lines can be painted or incised spider webs. Fragile looking, sometimes almost invisible, the enigmatic webs lend stability and a sense of accumulated time to the branches but offer no logical rationale. The artist purposely juxtaposes his paintings with an array of elaborate, hand carved decorative wax candles. You know — the fussy looking pillars of cut and twisted stratified colored wax that represented a certain kind of 70’s style but also burned down during drug trips or meditation into glowing, hallucinogenic cylinders.

The paintings and candles together form a cheerful context for Tull’s installation entitled “>------<”. This spare but insightful piece consists simply of a line of clear monofilament stretched at an angle between the gallery ceiling and a mirror-topped plinth. Beads of clear oil steadily cascade along its length and disappear at the bottom. Using a single strand of fishing line the artist evokes memories of all the hanging “rain lamps” that illuminated American living rooms back in the Eisenhower 50s, the ones bedecked with tiny statues of a Greek goddess demurely bathing behind a shower curtain of cascading drops. Tull’s approach summons that cultural memory with a light touch and weaves it back into a larger allegory about enlightenment.

Like the show’s esoteric title that ties together two disparate ways of approaching belief (eschaton refers to the end of time), his monofilament installation offers us a similarly mixed metaphor for structures of worship and enlightenment that embraces high art and trashy lamps. It’s a humorous conceptual gambit touching on the vast human capacity to find, create and/or warp deep meaning. The strategy gets a nice experiential nudge in this space because watching the stream of droplets we notice they appear to be both quickly and eternally falling, yet they also seem to slow to crawl when we focus on individual drops. To our brains it feels like time is flexing. In that moment we touch the realm of mystery that births all structures of faith.

Filling at room with playful and allusive artifacts of 20th century mashups between spiritual movements, art and altered consciousness paraphernalia, Tull’s “Convergences” sculptures sit like quietly meditating sentinels. Each sculpture is a tripodal form constructed from carved and cast acrylic panels covered in a thick skin of encaustic rubbed smooth. Each panel is etched on both sides with a shallow drawing of a spider web colored by a rubbing of oil paint.

Tull is known for the deep, rich color of “Convergences” and their careful inlays of bold, contrasting colors tucked into eroded small openings. In this show, however many of his triple forms are strikingly cool and pale, nearly white or transparent. The small holes penetrating their surfaces are unadorned. The color shift gives an edge to the sharp incising cuts the artist uses to draw each web on the wax’s fleshy surface. It also makes the subtle flecks or faint auras of bright color that do appear resonate like fading memories of something once alive. Indeed without the saturated color the darker delicate web structures take on stronger enigmatic presence. Standing out like lines on paper they suggest a raft of different meanings from ancient maps and scientific diagrams of gravity-bending space/time as well as enlarged samples of brain tissue seen under a microscope.

A web is an ancient symbol whose many meanings range from cosmic order or unending creativity, to a luminous net capturing divine enlightenment. The internet, with its language of web crawling search engines constantly seeking information, refreshes that symbolism for our technological age. ”From Enchantment to Eschaton" suggests that art can operate like search engines and discourse — connecting disparate ways mankind seeks to understand what it means that we are here.