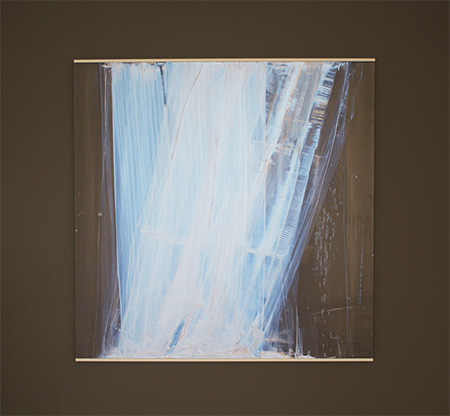 Although the title of this two artist show is “Gray Area,” the original concept was to mount primarily white pieces, as both Lucinda Cobley and Michael Crowder use white extensively in their work. They also share a love of glass, which plays an equally important role. Four of Cobley’s paintings are created with oil and pigments on three layered rectangles of etched, translucent white glass and cast acrylic. She paints on the layers and joins them together, using color on the lower levels and white oil on top, which results in predominantly white paintings with subtle undertones of color. She also sandblasts the top layer to create a lightly textured surface.

White cast glass comprises the entirety of Crowder's “Painting IV Reprise,” a delicate, crystalline facsimile of an ornate picture frame surrounding an opaque white center. Most of the shadow box “Machina Respiratio” (Breathing Machine) is also constructed from glass. A complex arrangement of moving cast-glass pulleys, barely visible through the opaque glass front, causes an antique bellows to inflate and deflate, almost as though the sculpture is breathing; hence the title.

A key painting in the show is Cobley’s “Reverb 1,” which was inspired by a collaboration with choreographer Teresa Chapman in which dancers performed during an exhibition of Cobley’s paintings last year. The twisting effect of their swirling costumes motivated her to include more movement in her work. “Reverb 1” has shifting nuances of color produced by the three surfaces: the bottom layer is a mirror, the middle one powdered graphite, and the top cast acrylic on which Cobley has layered thin veils of blue, white and gray paint. The lighting has a striking effect on the piece — when spotlights are turned off, the piece glows aquamarine blue, but when the lights are on, the white areas of paint dominate. The shift in color is partly due to her use of interference paint, a polymer emulsion containing titanium-coated mica flakes that shifts from blue to gold depending on the angle of viewing. Cobley often uses color refraction to create a variety of optical illusions.

Cobley and Crowder also share an interest in shadows. Crowder’s “Zone d’ombre” (Grey Zone), is an antique chair placed in a corner for which the artist has created an artificial “shadow” on the floor by arranging a thin layer of dark gray pebbles in the shape of the chair. Cobley’s layers of paint on glass and cast acrylic create nuanced shadows, which brings the paintings to life, much like Crowder’s “Machina Respiratio.” Although these two artists’ work seems quite different at first, common threads create a conversation among them that amplifies the individual pieces. The exhibition brings together two artistic virtuosos who work magic with their respective complicated mediums.