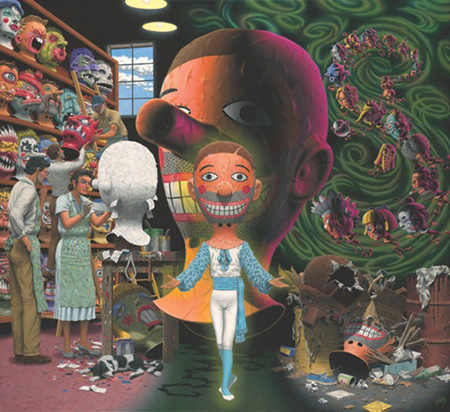 Conceptual Realist Robert Williams’ psychedelic cartoon paintings bring a history of art parody into the contemporary sphere. Cartoony grotesqueries and caricatures go as far back as Pompeii, with the popularity of this ironic art form continuing throughout ancient Egypt, Greece and Rome. By the late Middle Ages, artists as singular as Leonardo da Vinci raised satirical lampoons to a high art, inspiring future artists such Monet and Daumier to use the art form for political and social purposes. Versions of rebel art, such as those conceived by Williams, continue to thrive and persist as centers of controversy. Often provoking strong emotions, one need only to look to the recent events at Charlie Hebdo for testament to its quite real and perceived power.

Presented in two parts, “SLANG Aesthetics!” and “20 Years Under the Influence of Juxtapoz,” the latter highlights the continuing influence of, Juxtapoz Art & Culture, which Williams co-founded in 1994 with Greg Escalante, Craig Stecyk, Eric Swenson and Fausto Vitello. Growing out of a desire to expand exposure for outsider art, it was conceived as an alternative publication to mainstream art magazines. Enormously successful from the beginning, it is currently the most widely disseminated art publication in the world, and it continues to propel new artists to fame.

His myriad influences stemmed from west coast car culture (he went to work for Ed “Big Daddy” Roth in 1965), as well as horror films, trashy posters, tattoo iconography, girlie magazines, porn, surfer art and hot rod illustrations. The resultant mixture of underground comix (in particular “Zap”) and “Super Cartoon” paintings, time consuming works executed in the style of old masters, were antithetical to what was then considered highbrow art. Shifting to a kitschier, raunchy aesthetic in the “Zombie Mystery Paintings," he created dense labyrinths of psychedelic colors, surreal figures, apocalyptic conjectures and an incongruity of designs — horror vacui visions that make the retinas spin.

A series of sexy and ultra-violent images, for example, grew out of his involvement with the punk rock movement. These he exhibited in avant garde galleries and publications, joining forces with other non-conformist and anti-establishment artists such as R. Crumb and Clay Wilson. During a period of emerging feminism, his depictions of nude women in provocative positions served as fodder for controversy. Nevertheless, by rejecting the boundaries of establishment art, Juxtapoz has been instrumental in the exposure of generations of counter-culture artists.

By 2010, Williams’ status as a mainstream artist was further elevated by being included in the Whitney Biennial at the Whitney Museum of American Art. In 2013 he received a life achievement award as part of Barnsdall’s Beyond Eden Art Fair. If the door was barred early in his career, Williams ultimately busted it open by sheer force. Now he owns his legacy like few may claim.

“SLANG Aesthetics!" showcases 25 of Williams’ new oil paintings, as well as a series of drawings and large-scale sculptures. The paintings, though slightly less overwhelming, maintain the same weird blend of conundrums. Grotesqueries are present, but blended with a semblance of realism. In “Death by Exasperation,” for example, doctors and nurses are confronted by a monster. Set in a realistic landscape, the incongruity appears all the more perverse. Further absurdities are found in “Everywhere at Once Cabriolet” and “Decline of Sophistication,” where tangible and incongruous objects float through space as though propelled by a whirlwind. Of course, it is up to the viewer to decide whether his convoluted fusions lend themselves to interpretation, or if they are meaningless meanderings. Williams terms himself a Conceptual Realist, seeking not only to project opinions but to elicit responses as well