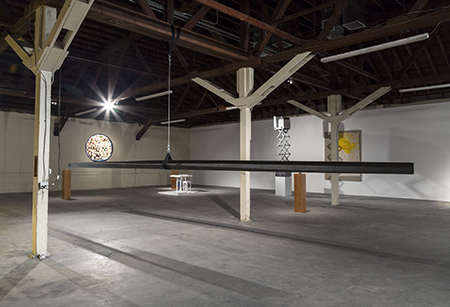 This can be a daunting space to fill, but Eric Wesley does it with aplomb. He exhibits not only the expected — a monumental steel I beam, aptly named "I Beam U Channel," suspended low from the ceiling in the middle of the room — but also the unexpected — diminutive sleeping figures, lovingly cast in plastic and placed on top of pedestals throughout the space. There are also two stained glass windows featuring abstracted globular and serpentine shapes, a Pierre-Huyghe-style environment entitled "Plants of New Amsterdam" and Wesley's take on painting, which consists of splattered acrylic red, blue, and yellow paint on cloth, tacked up on beige canvasses.

The artist associates the primary colors with the Cartesian coordinates of X, Y, and Z. Descartes, the philosophical father of the enlightenment, also pops up in works from the (pun obviously intended) “D'Carts" series, featuring actual carts sitting upright, turned over, or aloft on an extension mechanism, all referencing the Cartesian system. Wesley's use of space and frequent references to Descartes bring unity to the seemingly disparate works, asking viewers to contemplate the meaning behind the placement of objects in space as well as their own spatiality within this grid and those of the larger world.