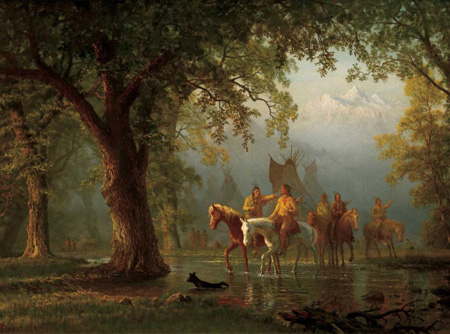 A large donation of 295 artworks about the American West by a wealthy German family is a game-changer for the Tacoma Art Museum and indeed the larger context of the Pacific Northwest museum scene. The region has never had a dedicated Western art museum except for the tiny Clymer Museum in Ellensburg, Washington, which spotlights John Clymer (1907-1989). Clymer is represented substantially in “Art of the American West: The Haub Family Collection.” The exhibition (which will rotate a few light-sensitive pieces this spring) is accompanied by a sparkling new wing designed by Olson Kundig Architects; a new curator, Dr. Laura F. Fry; and an expansion of the museum’s mission to feature Pacific Northwest art along with other American art.

In this sense and others, the exhibition’s treasures exist on a number of overlapping planes. A few of the works, such as those by Georgia O’Keeffe (“Piñons with Cedar,” 1956) and others, reflect modernist abstraction. Later works progress toward postmodern, multi-cultural stances, mostly by less well-known artists such as Chinese-American painter Mian Situ and Native American Kevin Red Star.

On another level, the Haubs went out of their way to acquire examples by European and especially German-American émigré artists who had marked affinities to the American West and the saga of the American Indian. Virtually unheard of, paintings by figures like Nick Eggenhofer, John Fery, Carl Kauba, W. H. D. Koerner, Carl Rungius and Walter Ufer contrast with examples by their legendary compatriots Albert Bierstadt and Karl Bodmer. In each case, sterling examples were found, partly to make the point that, as is pointed out in the lavish catalogue essays, Europeans were among the first artistic pioneers to explore the American West, recording the spectacular countryside as well as the fascinating indigenous cultures, customs and rituals.

To add yet another layer of meaning, Mr. and Mrs. Haub assembled a panoply of artworks by American artists who are a secure part of the 19th- and 20th-century art historical canon. These mesh with other important American artists already in the museum's permanent collection such as the American impressionists and the Ash Can School. For instance, Ash Can master Robert Henri holdings are now supplemented by “Young Buck of the Tesuque Pueblo” (1916); Bierstadt by “Departure of an Indian War Party” (1865) and George Catlin by his 1855 painting-document of the Mandan tribe.

Most important of all is probably the dazzling “Green River, Wyoming” (1907) by Thomas Moran, a leader of the Yellowstone School. Within the past century, in addition to O’Keeffe, there is Midwest regionalist Thomas Hart Benton’s “Lonely Horse” (1940), “Autumn Dawn” (1915) by N. C. Wyeth, “Roping a Palomino” (1908) by California artist Maynard Dixon, a magnificent 1919 landscape of Mt . McKinley by Sydney Laurence and several bronzes by Montana stalwart Charles M. Russell.

The first gallery in the beautiful new wing is sure to interest the public: 28 bronzes of cowboys and Indians on horseback; caribou; elk; pony express riders; a rattlesnake, a bear, a panther, big horn sheep and two adorable squirrels by Rockefeller Center artist Paul Manship. The most famous Western bronze sculptor of all, Frederick Remington, is represented only by a small painting. Disappointing, yes, but the 1797 Gilbert Stuart portrait of George Washington makes up for the absence of a significant Remington.

Traversing the overlapping layers of the show also exposes viewers to delectable tidbits of Western Americana (such as the squirrels), previously unknown to most of us. Mountain, desert and prairie landscapes are strong, as are portraits of Native Americans, from the 1826 “Wanata, Chief of the Sioux” by Charles Bird King (perhaps the first royal portrait of an Native American) right up to Clymer’s “Chief Joseph” (1967) and the even more recent “Buffalo Horse Medicine” (2007) by Red Star.

Too nostalgic? Once upon a time in the West, yes, but thanks to current scholarship such vignettes are now seen as touchstones for more detailed accounts of what else was going on at the same time: state-sponsored and privately executed genocide. Dr. Fry is utterly open about this, suggesting that our knowledge is now more sober and thorough, less romantic and racist, despite decades of Hollywood, TV and mass-trade fiction.

Acknowledging that millions were killed, the new historical narrative of the American West eschews such simplicities as “good guys versus bad guys.” For those interested in the revised approaches to our past, the catalogue essays are a good start, and a prestigious symposium on related topics is planned for the spring.

In the meantime, the absorbing scenes of people and land seen in “Art of the American West” will satisfy both those who wish to ignore such shifts and, better yet, those who wish to learn more about the rich and complicated background of an art that is both about the nation’s past and its equally paradoxical present.