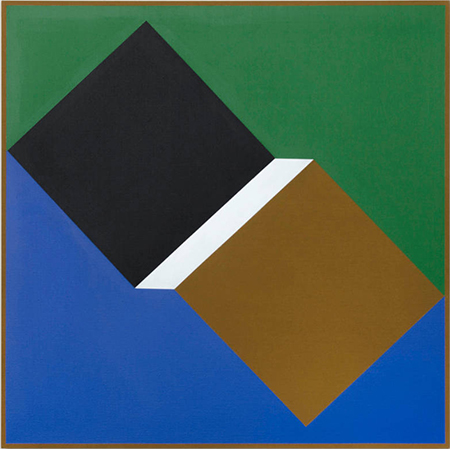 In the trailer for the new film "Tony DeLap: A Unique Perspective” (which premiered February 5th at the San Francisco Art Institute), the artist notes: “I don’t want to minimalize anything; what I want to do is complicate it.” So while DeLap, over his enormously successful fifty-plus-year career, has been grouped into the Southern California minimalist crowd, along with artists such as Larry Bell and Robert Irwin, his work is, indeed, playfully complex, tricking the eye and redefining the space it inhabits (the artist’s interest in architecture does not go unnoticed). He does use a little to do a lot.

This show is testament to that; it features a sampling of new paintings along with several works from years back. They range from a wall sculpture, the finely crafted "Bluely-bluey" (1992). The cuteness of the title is right in rhythm with the jaunty feel of this work, but belies its bold, even presence (the work is large, measuring 87 3/4” x 47 1/4” x 9”). Small collages and a drawing add depth to this sampling of DeLap’s masterful creations.

Working with precise lines that form exacting shapes, each in a single, flat tone, DeLap works his well-honed vocabulary of color play magic, so that his two-dimensional canvases appear to be moving into three-dimensional space. Such is the case with "Card Trick" (2014), in which two squares, one paper-bag brown and the other black, separated by a white parallelogram, bisect the canvas diagonally; the remaining spaces above and below are green and blue, respectively. The work, like all of the pieces in the show, is mesmerizing, and delivers the endless joy of knowing your optics are being taken for a ride.