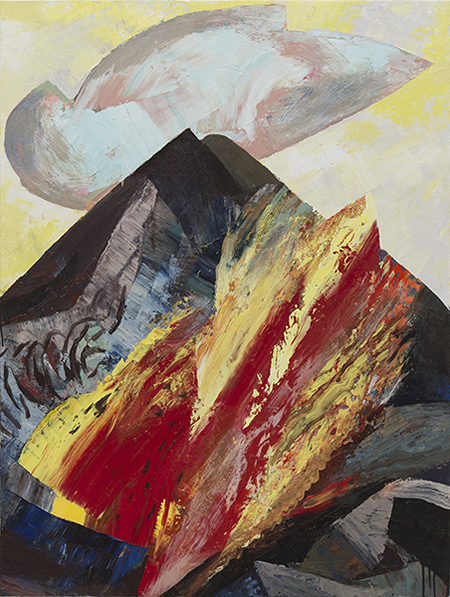 Dispensing the pictorial variety and diversity of her earlier work, Lucinda Parker’s current exhibit focuses on geological forms, mountain landscapes filtered through her masterful handling of acrylic paint and jigsaw-like, interlocking forms. Now 72, she has outlasted all her critics (except one) who characterized her work, as another put it, “stylistic wanderings of the dying modernist age.” Six museums, however, have honored her with surveys and retrospectives. Purportedly extrapolated from repeated observational visits to Oregon’s Mt. Hood, the 15 diversely sized paintings evade such a charge by retreating to representation.

It turns out that Parker is still a modernist, just less an abstractionist. Forthright and frontal, “Oregency” and “Small Clouds Over Glacier” are expansions upon natural scenes replete with clouds, glaciers and streams. The effects are bracing, bold and every bit as carved and sedimented as the boulders she now exalts. The late Seattle painter Kathleen Gemberling Adkison comes to mind.

Such a development has come about after decades throughout which it seemed Parker was searching more for what to paint than how. Brushes have always been secondary to palette knives, trowels and other applicators that do everything possible to draw out acrylic’s ability to resemble thicker oil paint. As a result, with peaks and gullies, fields and streams, each picture becomes a solidly constructed entity, shield-like in its material fixity, but light years away from any romantic or transcendent vision of nature. These are meditations or painterly elevations of the idea of a mountain. In this sense Parker may be link to another, younger artist, Ryan Molenkamp, who recently exhibited abstracted volcanoes. Lawren Harris, a 1920s Canadian scenic modernist, is also an apposite figure.

The largest works, “From Owl Point” at 7 1/2 feet, “Butte” at 9 feet and “Snow Dome, Two Snags” at 5 feet, are majestic and visually commanding, reminders of the artist’s numerous public art and corporate commissions. Snow whites are juxtaposed with reflected pink sunsets or crackling blue crevasses. These are Parker’s most regional artworks, capturing vividly the impact of extreme heights, cold temperatures and optical grandeur. At the same time, however, closer to Marsden Hartley or the British modernist Howard Hodgkin, the paintings are curiously airless, boxed-in vistas that could be glimpsed from the window of an Alpine train or a wandering helicopter. Horizons struggle to insert oxygen.

While the smallest works, such as “Pinto,” “Elliot Glacier” and “Cracked Ice” are tightly cropped and just as densely painted as the bigger works, they, too, suffer from a compositional fallacy: the centered shape. Each painting solves the compositional issue the same way: place the mountain in the middle. After a while, this can become tiresome.

If Parker were to return to greater abstraction, “Slash Fire” and “Upper Coe, Two Clouds” could be guides. Simplified and reductive by comparison, their far fewer elements — cloud, peak, and fire in the former — easily segue toward a late, late modernism that re-addresses the “how” of an abstract painting without any longer worrying about the “what.” To paraphrase British climber George Mallory’s answer to why climb Mt. Everest (“Because it’s there.”), now that Parker has seen it and painted it, the mountain can recede slightly (or altogether) to make room for further chromatic and compositional exploration. Retreating to representation was one solution; progressing toward greater abstraction would be another, perhaps more dazzling one.