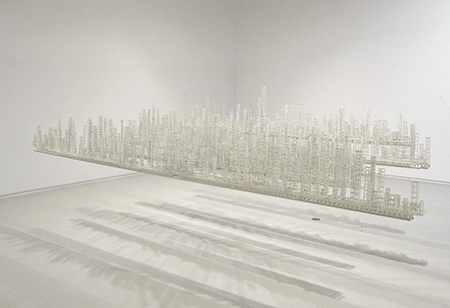 The architectural sculptures that Katsumi Hayakawa creates from the simplest elements — mostly paper and glue — are magical, and none more so than “Fata Morgana.” Defying gravity as it floats in the center of the gallery, this ghostly construction is like a mirage. In fact, its title refers to a type of mirage that appears to be hovering just above the horizon. Fata Morgana is the Italian name for Morgan le Fay, the powerful enchantress from the Arthurian legend, and the mirages named in her honor are described as “fairy castles in the air.” Hayakawa’s “Fata Morgana,” however, suggests a large metropolis in which dozens of perforated rectangular towers rise like skyscrapers from suspended rectangular bases. Seen from across the room, the sculpture resembles a microcosm of a large, densely populated city like New York, Tokyo, or Beijing.

All of the pieces in “Paper Works” are based on a grid. For the wall piece “Code no. 3,” Hayakawa starts with grid-printed paper. Using a matte knife, he cuts out three sides of a square and bends the paper outward to reveal the acrylic mirror attached to it or the blue film below it. The bits of mirrors at different angles catch the light, while other cutouts form intricate patterns and pathways. Light shining through the small openings creates secondary designs below the surface. Some sculptures extend out from the wall like shelves, with horizontal layers formed by cut-out sheets of paper, wood, reflective sheets, and other materials. “See from the Side 3” is one of three that encourage viewing from the side as well as the front. The intricacy of these pieces draws the viewer close in to investigate how they are constructed.

Hayakawa’s painstaking process of cutting, folding, and gluing — multiplied by thousands of repetitions — results in mesmerizing works of art. His suspended urban landscapes are serene, yet they still reference the dense urban environments growing across the globe and, by association, bring into question the fate of the people who live in them.