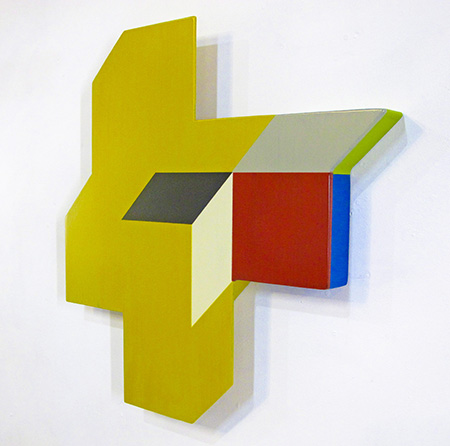 Pard Morrison’s vibrant cubist work develops an understanding of pixels that have been blown up to grand proportions. From sculpture to smaller works on paper, the artist utilizes enamel, acrylic, and fired pigment to create monumental works that explore forms found in the digital and analog. The work only comes off the wall a few inches, yet the illusory nature of the cubist forms appear to come off the wall, producing a multi-layered effect. This occurs due to the artist's careful choice of color, which either complement or polarize each other, elevating the other elements in the visual plane, and consequently approaches the viewer.

This also happens with the free-standing sculptures that are included in the exhibition. As the viewer changes position, different forms in the work morph slightly, the change in form is nuanced, yet inescapable, and demonstrates how perspective can change even the most finite form. The material of majority of the sculptures, both freestanding and on the gallery walls, is fired pigment on aluminum. These experiments in color and illusion will please any graphic designer, 8-bit video game junkie and more specifically, aficionados of John Chamberlain and Donald Judd.