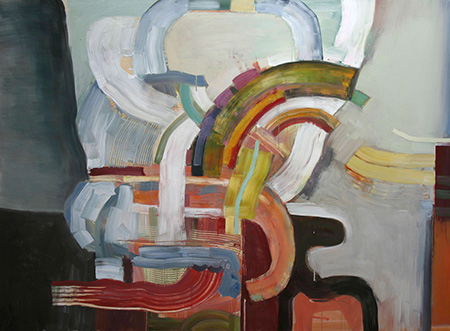 In the last few years Robert Jessup, formerly a painter who dealt primarily in representation, has taken up the torch of abstraction with a passion that defenders of objective art would label a betrayal. His latest pieces, executed in oil and averaging a large-scale 60 x 80”, adorn the two main gallery spaces. In Jessup’s words his new methods utilize an “improvisational manipulation of form” that eschew “representational tropes” such that the paintings are “freed to powerfully and expressly be.”

In this he succeeds because this body of work resembles, and searches beyond, that of the early 20th century modernism proponents of abstraction like Stanton Macdonald-Wright and Morgan Russell. Unlike such forebears, Jessup’s pieces are far more muted, favoring a natural color scale that underplays primary colors. These paintings have a musical and lyrical quality in the layered and energetic flow of paint and line that express emotion. This is clearly observed in "Iowa City" (2014), one of the best paintings in the show.