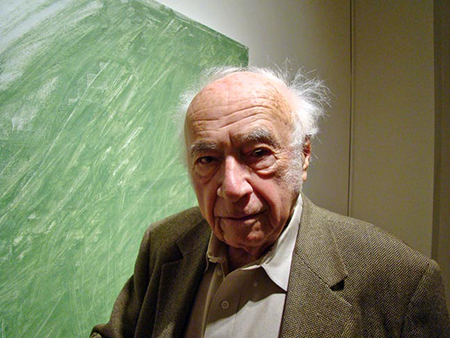 No one expected pop art; that was its originality. “Pop Departures” (recently at Seattle Art Museum) triggered other responses, memories and reflections as well as those of the eyewitness collectors. One eyewitness critic and curator, Peter Selz, now 95, shared his views on the continuing power of pop art in an exclusive telephone interview from his home in the Berkeley hills. Subject of a recent biography, “Peter Selz: Sketches of a Life in Art,” (Paul J. Karlstrom, U. of Calif. Press, $38.95) and his daughter Gabrielle Selz’s memoir, “Unstill Life,” (Norton, $26.95), Selz chuckled as he recalled early New York responses to pop art and updated his own thoughts on the pervasive art movement.

Agreeing with the Germans (where he was born), Selz said capitalist realism was a “better term than pop art, more descriptive.” Pop art was not only rejecting Abstract Expressionism, it also dismissed Selz’s curatorial pet, expressionistic figuration, advocated in his epoch-making “Images of Man” show at the Museum of Modern Art.

Asked to rank the affiliate artists now, half a century later, Selz cheerfully obliged: “Lichtenstein was very apt at what he did, all those dots, but so what? There’s no spirit. Not only was he rejecting postwar humanism, but he replaced it with nothing.

“Warhol looks better all the time: he confronted important things. Early social Warhol is better; I didn’t appreciate it enough at the time. Sure, there was the celebration of consumerism; that was very open and honest. And now we learn he was so religious, too ... Deliberate ambiguity is part of the power of his art. You can’t pin it all down the way some critics think they can. Don’t forget, when they asked him about the soup cans, he said, ‘I like tomato soup; I eat it every day.’ He was not criticizing it.”

Asked about the sexism of Tom Wesselman and Mel Ramos, he confessed, “I like real pornography, not fake pornography! I’d rather look at Penthouse than them.” On Robert Indiana, “Not that interesting now; just big letters, too simple, too dull.”

James Rosenquist also elicited a shift in Selz’s opinion: “Rosenquist is so-so ... They are dated. He should’ve stayed with the billboards. It was a matter of size — his best works — not scale or subject matter.”

As to the best and the worst? Besides Warhol, Selz favors Oldenburg: “He was a master of metamorphosis. I met him; he was extremely bright, had great wit and a sense of humor. These large structures he made before he began collaborating, they look better and better. In a way he was like Charlie Chaplin, American but at a remove in order to comment — and laugh.”

If Oldenburg and Warhol are holding up best, 1980s phenomenon Jeff Koons is “bullshit. Really the last straw. The whole Whitney was filled with his work this year. You see, the Whitney can’t discriminate between good and bad anymore. But things move on.”

With that, Selz returned to his latest project, another show, another book, another interview. The unstoppable Peter Selz has lived to see it all, including pop art, and its rise and fall.