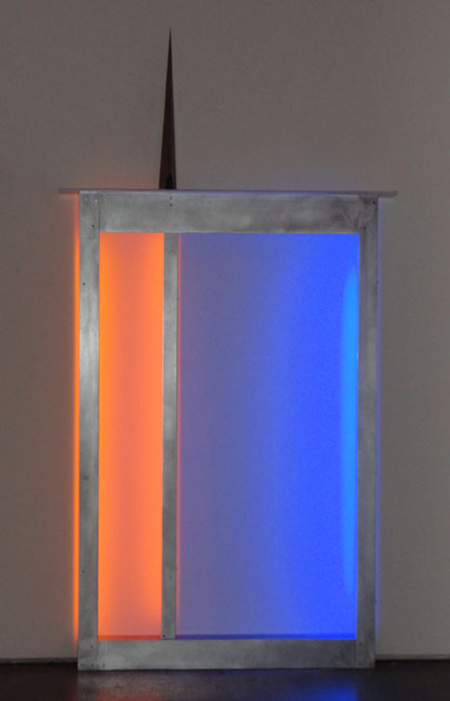 Entering this cavernous front exhibition space, you’re apt to think you’ve stumbled into a pagan temple or the set of a Hollywood sci-fi film. Lining the tall, white walls, Hap Tivey’s fancifully futuristic sculptures emanate soft glows of intensely saturated color. Tivey is numbered among the original exponents of the Southern California Light and Space Movement, dating to the late 1960s. Like other artists working with light — Robert Irwin, James Turrell, and the late Dan Flavin among them — Tivey is part minimalist, part mystic.

His work toys with viewers’ perception and, beyond pure opticality, with the ways in which we process light emotionally, psychologically, and spiritually. Indeed, there is something that feels sacred about colored light filling a cathedral-like space. One thinks of the chunky stained-glass windows at Le Corbusier’s Notre Dame du Haut chapel in Ronchamp, France: a hushed, monkish interior shot through with light beams slanting down through many-hued windows.

In exhibitions of the early 2000s, Tivey’s signature works were screens of diffused LED light behind fabric or plastic sheets, the lights often in shapes that suggested land, sky, sun, and moon. But in this new body of work, only two pieces conform to the artist’s classic style. In "RGB Goldbogen" gradations of red, green, and blue, also in LED, are delimited by a black aluminum framing device. It looks like a Color Field painting that somebody plugged into an electrical outlet. In the second piece, “Threshhold" [sic], a horn-like triangular protuberance pokes up from the framing structure.

The remaining works are more sculptural, except that they don’t so much have pedestals as they are pedestals, holding up light itself. The metal armature of "Duex Machina" [sic] resembles an oversized tuning fork, while “Tulip," "Cooper Barnett," and "Softgold Corner" are great staffs of color with which one might hail the mothership in "Close Encounters of the Third Kind." These works, along with "Pale Barnett," are perpendicular, whereas "Corner Flavor" tilts at an angle, joining with the floor in a triangle.

For all their minimalist cool, the surfaces are not smooth or polished. The metal is often nubby, rough and raw, making for an effective tension between elegant shapes and inelegant finishes. The works’ central appeal lies in the interplay between the structures, the LEDs and the space surrounding them. The light glows not only inside the metal forms’ contours, but also onto the walls behind them. With tapered fingers the light reaches out from each piece’s perimeter, annexing the space surrounding it — art literally spilling over into the space of life.

The viewer is left a bit perplexed, wondering where exactly the object begins and ends. This is the brand of head-scratching illusionism at which Tivey excels. Contemplating light — and let’s face it, this isn’t any ordinary light, this is light at its most sumptuous — as it encroaches upon one’s personal space; after awhile the boundaries between the self and the light diminish, until light ceases being a wave or particle and feels a part of you. If that sounds a little woo-woo, blame it on Tivey’s mystic temple, as good a place to find God as any, and better than most.