“The Heart is the Frame"
LACE, Hollywood, California
Preview by Diane Calder 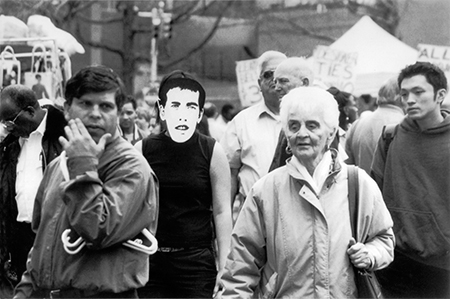 The curator of “The Heart is the Frame," Shoghig Halajian, selected participants and laid out the exhibition's groundwork with assertions from philosopher Gilles Deleuze in mind. Nearly a century after Eadweard Muybridge propelled a miner’s pick rhythmically back and forth in one of his famed photographic studies of repetitive motion, Deleuze claimed that art is often the source of repetition. “It is not by chance that a poem must be learned by heart. The head is the organ of exchange, but the heart is the amorous organ of repetition.” Halajian quotes the statement above from Deleuze’s book “Difference and Repetition” as a link to understanding how repetition and routine inform our way of behaving. She emphasizes that the work by these seven diverse artists “explores how desire is integrated into the project of normalizing. By highlighting desire within daily life, it aims to empower and stimulate one's position in the realm of the everyday, and to rethink the everyday as a site of critical inquiry and political potential.”

Investigating factory life at the invitation of union workers from Bath Iron Works in 2008, Sharon Lockhart produced two films and three series of photographs, including the two large-scale “Lunch Break” prints on view here. Workers unwind in their chairs during a short respite from productive labor. Sequentially arranged and shot from a vantage point designed by Lockhart to stress the narrow, claustrophobic perspective of the confining space, every adjustment of the workers’ bodies plays off against the stark repetitiveness of the room’s cold, utilitarian furnishings.

William E. Jones mines the unedited flash frame film, “Berlin 1961,” from the United States National Archives, unmasking outright falsification in the employment of actors on sets existing side by side with surveillance footage of the construction of the Berlin Wall. Jones determines from his scrutiny of the government film that sequences appearing to be documentary footage are actually propaganda, enlisting residents of West Berlin as  (willing or unwilling) extras in one giant Cold War movie.

Anna Sew Hoy invites visitors to sit and contemplate the transformations she integrates into familiar looking objects such as the denim fabric, glazed stoneware, blue tissue and vinyl wallpaper that she incorporates into her “Dialog Bench.” Sew Hoy’s functional work suggests that even familiar objects we use repeatedly in our daily lives can be worthy of close contemplation.

In response to the Patriot Act and Snowden/Manning whistleblower cases, Harry Dodge utilizes found materials to arm ordinary citizens against impending threats allied with surveillance. Underscored by repetitive gestures that Dodge finds necessary when transforming materials such as plastic salad dressing jars and Play-Doh containers into “Emergency Weapons,” the artist plays up paranoid response to real and imagined impending threats.

Tris Vonna-Michell constructs installations through the layering of narratives, photographs and mementos, presented using antiquated technologies including slide projection. His “Wasteful Illuminations” is a travelogue-inspired recollection of Japanese sites the artist remembers visiting as a teenager. Vonna-Michell’s recounted memories center around ordinary locations that have become sources for a score and a sound composition. Interweaving Japanese and English utterances and rhythms, Vonna-Michell locates knowledge in the subjective, erasing historical certainty.

Leidy Churchman’s seemingly naïve twelve-part oil on canvas work, “Flotsam and Jetsam,” addresses themes of imprisonment and objectification through various loosely associated images: an untreated canvas with the text JAIL printed in black and white, a police officer’s badge steamrollered onto a square surface, a police car, brand logos, an auction sign, etc. Grounded in the discussion of queerness and difference along with the distaste for white male dominance in the arts, Churchman’s work takes on broader implications in the light of recent protests against police brutality.