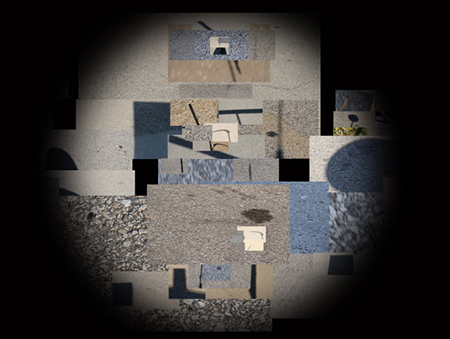 In her first solo exhibition in the United States, recent School of the Art Institute of Chicago MFA recipient Orr Menirom presents “Limited Speech Holds Endless Misunderstandings.” In this video work, the Tel Aviv-born artist appropriates footage of noted intellectual and activist Noam Chomsky being interviewed by Israeli television journalist Dana Weiss following the 2010 incident in which Chomsky was barred from entering Israel as he attempted to fulfill a speaking engagement at a university. In the interview, shot in a comfortable hotel lobby, the boundaries of journalistic objectivity break down as the political discussion gets heated.

In Menirom’s hands the manipulated audio begins to falter — subtly at first — before giving way to something far more abstract. Suddenly, the lobby is gone, replaced by a black screen slowly displaying initially indecipherable footage of a shadow upon a desert-like scape. A new narrator, borne of Menirom’s cutting-up and reassembly of the interview audio, emerges. Here, Chomsky’s male voice and Weiss’ female one are blended together, genderless and disembodied. These voices, previously clashing with deep-seated differences, now become a singular entity, expressing anxiety, wonder and bewilderment over an enigmatic dream. In “Limited Speech Holds Endless Misunderstandings,” Menirom regards ideology and harsh realities not with didacticism or indictment, but by deftly mining the more universal spaces of ambiguity and emotion.