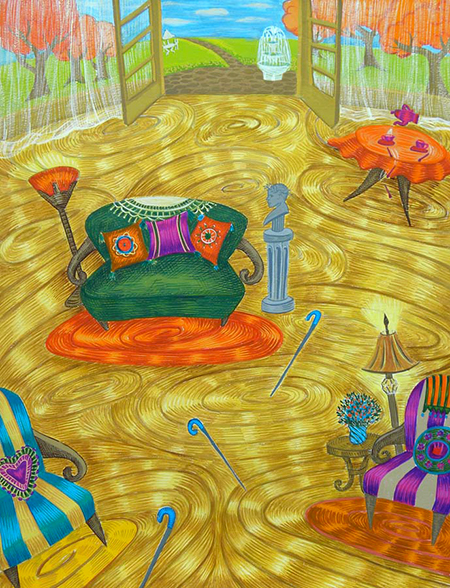 Is it possible to reinvent yourself? Artists Lou Beach and Patssi Valdez experienced success in their respective subcultures before embarking on new creative journeys. Beach was primarily known as an illustrator and Valdez as a political artist/activist. While the two artists are represented in separate exhibits here, their combined shift in focus towards a more personal and playful direction has ushered them into a second life that provides a basis for this pairing.

Beach was born in Germany and immigrated to the United States as a child in the 1950s. Moving across the country several times, he simultaneously picked up his interest in art through the years. His professional illustrative work could be seen in high profile publications like The New York Times, The Wall Street Journal and Rolling Stone. Picking up writing later in life, Beach is full of surprises and whatever the medium, his quirky sense of humor seems to bleed through the work.

Collage was always of interest to Beach and he found the borrowed imagery effective in developing new narratives. Beach’s 2011 book “420 Characters” started as a series of Facebook updates that morphed into a form of storytelling. The collages on view start in a similar fashion and eventually become something substantial. The transformational quality engages free flowing visual associations, as an image of a ship is turned upside down and becomes the foundation for a face, or alternatively an inanimate object is personified through a set of shoes.

Beach references a dream state that he experiences just before he wakes up each morning. It’s a time where he can find characters. The surrealist-like imagery relates in feel to the great proponent of Dada, Max Ernst. A good example is "Run, Redhead Run, Run (There’s no ocean in Indiana),” in which the bulky forms and haunting combinations that would otherwise be nightmarish become the stuff of fairy tales in Beach’s deft hands.

Valdez on the other hand was a founding member of the Chicano artist collective Asco and has led a life of radical activism. Asco is Spanish for nausea or disgust, and characterized the group’s posture quite well when contexualized in the phrase ‘me da asco’ or ‘it (your art) disgusts me.' Their social activism was manifested through performances, photography, and installations that garnered Valdez (with collaborators Harry Gamboa Jr, Gronk [aka Guglio Nicandro] and Willie Herrón III) a reputation for civic engagement.

Valdez and her contemporaries characterized themselves as self-imposed exiles and their reputation was nothing short of bombastic. A Chicano brand of Dada, Asco was featured a few years ago in an exhibit at LACMA (2011) as part of the Getty’s Pacific Standard Time initiative. The irony of this cannot be overstated, since the group at one point signed their names on the museum entrance as a response to a curator who made a statement that Chicanos made graffiti, not art.

Valdez has long since reinvented herself as a painter. Her work focuses on internal musings that depart from her political past. The whimsical watercolor paintings here are colorful and exuberant. Chairs, tabletops, and household items dance across the paper and are surprisingly active. Works like "The Painted Sea depict the interior of a plush room with satin-covered armchairs and pedestals complete with classical busts. Large translucent curtains frame the image before it recedes beyond the interior of the room to a blue body of water that has a slight reflection from the moon. The work is laced with symbols and an escapist spirit imbued in objects that seem to float off their axis and suspend themselves precariously in space.

While the surface treatment of Valdez’ tea parties and ornate subjects may set you at ease, there is still an element of shock. "Still Life with Nopal" features a vase with flower, candle, and a prickly pear cactus (nopal). An odd assortment, it’s complemented by a human heart that rests on a red cloth. The seemingly traditional composition becomes frightening and somewhat sad as the heart is dropped in like an unexpected tribute.

If Valdez and Beach are from different worlds, their narrative driven works are both conceptually curious and dark. The colorful compositions of Valdez complement the bizarre collages of Beach and together they introduce highly personal languages of fanciful symbols and gravity-free environments. While neither fully releases their demons, the idiosyncratic juxtapositions leave the viewer in a pleasurable state of discomfort.