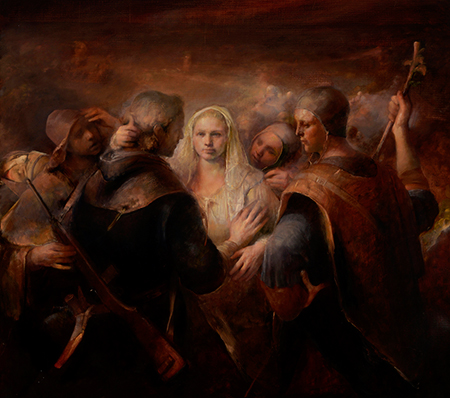 The title of this show, “Pupils of Apelles,” references Apelles of Kos, an early Hellenistic Greek painter whose taste for narrative realism inspired numerous Renaissance artists to emulate him. No original work by the ancient master is known to exist. He has gained fame primarily as the official portrait painter of Alexander the Great, as described in rave reviews by the Roman scholar, Pliny the Elder. Since the late 1970’s, the Renaissance allegories have inspired figurative Norwegian artist Odd Nerdrum and the apprentices who work under his tutelage, to revive what they perceive to have been Apelles’ style. This exhibition features generously sized, allegorical paintings by Nerdrum and three of his apprentices Luke Hillestad, David Molesky and Caleb Knodell. They all favor Apelles’ (as described by Pliny) limited palette of browns and grays in their creation of dark, Neo-Classical works with an abundance of nude and semi-nude women who often seem to find themselves in dire circumstances.