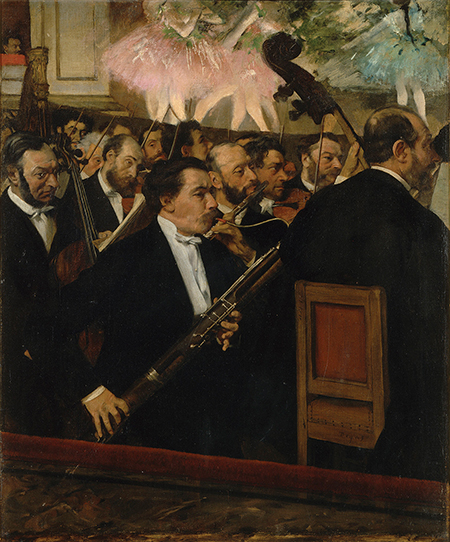 Over seventy masterpieces on loan from the Musee d’Orsay in Paris adorn the walls of the recently constructed Renzo Piano Pavilion at the Kimbell Art Museum. Through the lens of Impressionist portraiture, the exhibition examines French painting during the later half of the nineteenth century within a span of about fifty years. It elegantly captures the bold and vibrant departure that the Impressionists forged in classic paintings by Cezanne, Degas, Manet, Monet and Renoir.

In roughly chronological order, visitors experience the pictorial evolution of Impressionism in four thematic sections that wind through the gallery space. In the first room a riveting group of paintings, anchored by Henri Fantin-Latour’s iconic "A Studio in the Batignolles" (1870) — featuring many of the artists on view — set the stage for the visual and intellectual feast presented by the exhibition. This selection of paintings, especially provided this new architectural context, is dazzling for their sheer quality as well as their historical relevance.

Fantin-Latour’s large-scale group portrait is an homage to the Impressionists, who he saw as an important group of younger artists. At the center, seated before an easel, sits Manet, who never actually exhibited with them but was, nonetheless, a mentor. Also included are Renoir, Monet, Bazille and the mostly forgotten Zacharie Astruc, an artist and critic who championed avant-garde art. Here, he sits for Manet as the artist paints his portrait. Fantin-Latour executed the painting four years before the Impressionists would mount the first of eight exhibitions, from 1874-1886, which were meant to function outside the official salon system. Fantin-Latour recognized the significance of the group and in a way canonized them years ahead of the broad cultural recognition they were to achieve.

“A Studio in the Batignolles” is flanked by two signature pieces on the adjacent walls. One, a painting of his future sister-in-law "Berthe Morisot with a Bouquet of Violets" (1872), renders the subtle beauty of the artist, her face bathed in light, in a black hat and dress against a washed out background. The black notes are classic Manet; he never quite acceded to the lighter palette of his younger peers.

This can be observed in another gallery in the superb "The Balcony” (1869). Dark black hues occupy a bourgeois apartment that is framed by contrasting greens in the shutters and railing. Here again Manet used Berthe Morisot as one of the three figures in this unconventional view of modern life that observes people in an inward way, rather than a view from the balcony down onto the street, as so many artists had done. This framing suggests something about the complacency and boredom of the upper classes that stare out beyond the railing with indifference. Their gaze never seeks the viewer in this iconic image of modernity. By contrast in “Olympia” (1863), Manet’s then shocking image of a nude prostitute, it was essential for her gaze to confront.  In "The Balcony" the setting and positions of the figures convey the message of class difference indirectly.

The second painting positioned near "A Studio in the Batignolles," Manet’s "Emile Zola” (1868), renders the writer and art critic, himself a staunch defender of the new art, surrounded by images and objects that represent his interests. This pivotal painting, much admired by Fantin-Latour and probably an inspiration for the group portrait, identifies the coming wave of modernity as a confluence and proliferation of images and ideas. Zola poses among things representative of his tastes and concerns: Japanese art, copies of Velazquez’s Bacchus and Manet’s Olympia and a book by Charles Blanc about painting. Each of these items contributed to the modern sensibility and how life was compelled to interphase with the modern metropolis.

This exhibition faithfully captures a progressive time of rapid change. Not just artists but also writers, critics, patrons, dealers, musicians and an ascendant middle class each contributed to a new portrait of cosmopolitan life. All are present in the selections of “Faces of Impressionism.”