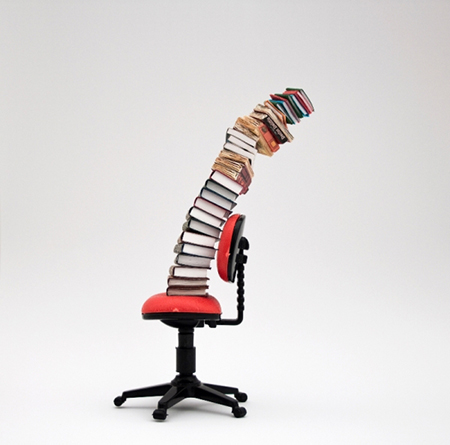 Jeanne Silverthorne casts her sculptures in synthetic rubber and with that surprising physicality she earnestly but also playfully autopsies the life out of the contemporary world. "Down the Hole and Into the Grain" is the artist’s continuation of an ongoing examination of nature morte, (literally, dead nature) that plays on the tradition of still life. The translucent softness of the rubber, which Silverthorne has referred to as a kind of “flesh”, makes familiar objects selected from things in her studio and daily life decidedly strange and provocative. Pseudo rolls of wood grained flooring, huge lumber packing crates, blooming flowers, dentures and rolling wood dollies all drop their physical ties to the natural world and become oddly artificial in ways both layered and disturbing.

The artist says in her statement that she is “looking for something that has been lost”. Displayed here in neat aisles like preserved specimens from an underground vault her color-blanched objects offer us the opportunity to ask questions about what is about the natural world that generally goes unmissed in a world of rampant representation and life-like simulation.

What indeed are the signs of life in our brave new world? Living things have an animating force; they move and reproduce. Technology and science have copied and messed with that simple formula until the boundary between naturally alive and life-like is a blur. Silverthorne joins in the fray. In the past she has constructed sculptures that used mechanics to actually move. Some of these sculptures potentially glow in the dark like bioluminescent denizens of the deep, but none of them actively move. Instead Silverthorne parodies procreation. By copying in miniature some organic shaped chunks of rubber left over from the oozing mold making of her sculptures she laughingly treats her fabrication process as female labor and the ongoing copies she makes of the real world as a simulated progeny. It's a clever shift.

Living things however, also die. Silverthorne’s sprawling coils of cast electrical cable, naked silicone light bulbs, and rubber power boxes give us the industrialized world’s version of life’s animating force reframed as instruments of allegory. With them she brings us to the weirdly absurd activity of considering still life in a world of simulation. Her limp rolls of wood grained rubber flooring signal the process of natural decay by sprouting clumps of equally artificial weeds. Some pristine looking unreal planks crawl like rotting logs with similarly unreal bugs or flies. Her simulated lumber shipping crates sometimes sag towards collapse, but others sit like pale graphic shrines displaying miniature cast self-portraits or posthumous sculptures of people from the artist’s life. In these small figures a pinch of real human hair wildly erupts from each of their colorless little heads. The hair, like growth rings on a tree, is a residue of actual living growth. But here it stands out as the hairline demarcation between life and a manufactured life-like representation. (I have a feeling that visual pun, like others in the exhibit is intended).

All the tromp l’oeil crossovers between real and artificial life and death make for quite a hallucinogenic journey. There are piles of rubber scraps teeming with fake caterpillars, a colorless black and white sunflower committing a slow suicide with a noose made from the cord of a useless electric lamp and elsewhere dead flies pile up beside a stack of ignited gummy dynamite. Yet the tradition of still life images as moral messengers pushes us to read more blatant ecologically related life and death messages into pieces like “Top of the World”. In this sculpture a teacher’s desk globe, totally smooth and eerily white, empty of seas or landmasses, sits beneath a plastic vitrine on top of a fake crate. At the top of the globe two miniature white skeletons are having sex while big black rubber flies either suckle at the globe or lay lifeless beneath it. It’s an emotional and unsettling vision of natural inevitability given an unnatural, toxic connotation by virtue of the artificial materials. A tidy little parable about this reality I don’t want to remember but still find hard to forget.