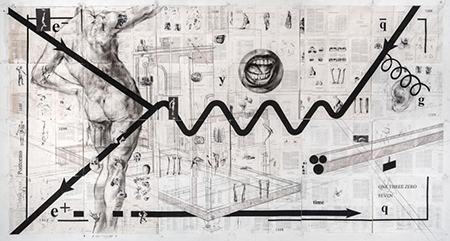 In 2012, James Drake embarked on an undertaking to complete at least one drawing a day for two years. His initial 1,242 drawings are currently on display at the Blanton Museum of Art in Austin. Subsequently, he has been adding to the series, and approximately 40 drawings from 2013-2014 comprise this show, which continues to affirm Drake’s formidable talent as a draftsman. Most pieces are displayed as diptychs or triptychs, with “Thank You Pontormo, drawings #1284-1304” composed of individual drawings joined to make one large piece combining dozens of images. Drake often draws inspiration from art historical figures, among whom is Jacopo Pontormo, the 16th-century Florentine Mannerist master known for his attenuated figures and ambiguous perspective. The male nude that dominates the left-hand side of the Drake’s piece is a direct homage. In these drawings, the past and the present don’t collide, they coexist.

“Thank you Pontormo” is incredibly detailed. Drake has drawn a large, open architectural structure that appears to extend out from the flat surface. Strewn across the picture plane are the various images, including an open mouth and an ear, as well as letters, words, and symbols. One of these words — “time” — as a concept permeates Drake’s work. These sequential drawings, and the nature of the artist’s serial commitment to them, are a tangible way to mark and measure the passage of days.

Other drawings are beautifully pristine. The diptych “Black Swan, drawings #1254 & 1255” depicts a small image of a swan on the left and a larger detail of a wing on the right. Likewise, “Spider & Glove, drawings #1256 & 1257” juxtaposes a small spider on the left and a large black glove on the right. Other subjects of Drake’s scrutiny include animals, architectural forms, the human brain and the human body. These astonishing drawings provide a glimpse into the day-to-day observations and musings of an artist who is always paying attention.