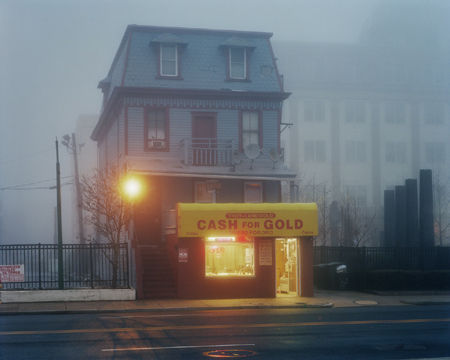 Mike Osborne’s newest and highly conceptual body of work, “Monopoly,” opens with a stylized and metaphorical diptych of the famous game board such that the pieces face each other as mirror images.  The other fifteen photographs in the show are a surreal photo essay, indirectly depicting places in Atlantic City, the original inspiration for the game itself. This process must have involved a Situationist derivé through the now nearly bankrupt casino town akin to the method involved in John McPhee’s 1972 short story “The Search for Marvin Gardens.”

The resulting images portray and reflect an eerie desolate ghost town through the play of light and shadow. The collection of images addresses and illuminates the failed ambitions of both the city and it’s developers. They bet everything on the casino business, failed to diversify, and ultimately went bankrupt. An irony not missed by Osborne: the pessimistic goal of the game, to bankrupt your opponents, mirrors a situation where the victims are real, their plight and perseverance evident in the frame.