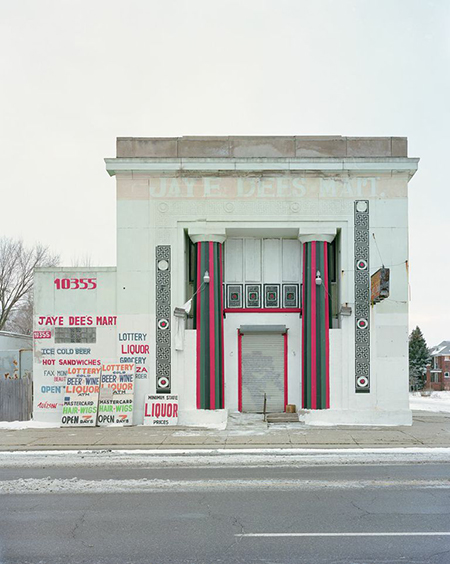 With their imperious façades and colonnades, their Roman letters etched into marble, the great bank buildings of the early 20th Century deployed the tools and tricks of monumental architecture to communicate ideals of stability and permanence. As the decades passed, however, many of these banks went out of business or relocated, leaving behind husks of structures, which were subsequently taken over by less august businesses. New York City-based photographer Michael Vahrenwald has captured these incongruous scenes in his series, “The People’s Trust.”

In photographs taken in New York, Philadelphia, Pittsburgh, Wilkes-Barre and Detroit, he directs viewers' attention to former bank buildings variously repurposed as a Payless Shoes, gymnastics studio, Chinese restaurant, and liquor store. These jarring images tweak our conceptions of urban decline and renewal, devolution and evolution. They fit within the “ruins-porn” genre so fashionable in recent years, fetishizing architectural decay.  Vahrenwald’s haunting exhibition is apt to remind viewers of Percy Bysshe Shelley’s poem, “Ozymandias,” with its foreboding image of a “colossal wreck, boundless and bare.”