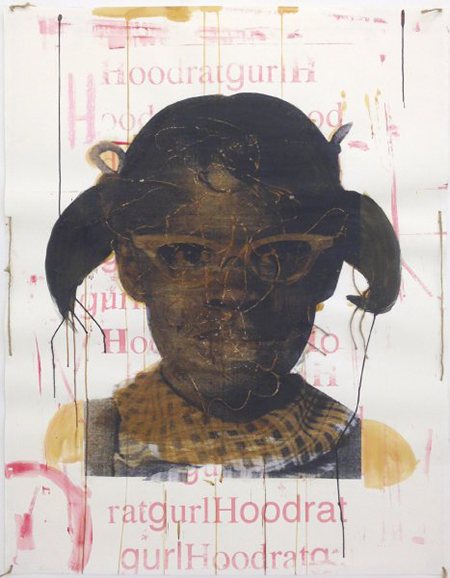 Like so many women, Deborah Roberts grew up looking at fashion magazines filled with glossy photographs of impossibly thin, impossibly beautiful models. Unfortunately, the most popular magazines — those like Glamour, Mademoiselle, Vogue, etc.–presented few role models for a young, African-American girl. Roberts' art history classes were no better. From Renaissance beauties to ethereal Pre-Raphaelite women, the ideal female figure was invariably presented as fair-haired and pale-skinned. After Roberts reached a certain age, however, she began questioning these stereotypes by creating works of art that challenge society’s perceptions of beauty.

In Roberts’ current exhibition, the viewer is confronted by angry, belligerent black girls. But their portraits have been altered, augmented by the addition of magazine cutouts of large red lips or straight blonde hair. The result in collages such as “Untitled No. 50” and “Buttress” is a frightening adolescent who is neither black nor white nor beautiful. Roberts makes her point — that a desire to achieve ideal beauty is an impossible goal, and one that ultimately results in a grotesque, unsettling image.

Roberts uses a more subtle approach in “Gone Girl,” where a female figure gazes at herself in a full-length mirror. The image is reminiscent of Picasso’s “Girl Before a Mirror,” in which the reflection is so dark that it seems to reflect a poor self-image. Roberts expresses the same sentiment in her piece by erasing or obscuring the lines of the figure with paint so that the girl seems to be disappearing.

One of the most disturbing images is “Untitled No. 33,” which depicts a young black girl with the top of her head sliced off, allowing three screaming lab monkeys to emerge. Unfortunately, the notion of African Americans being regarded as inferior persists in pockets of the country, despite the half century that has passed since the Civil Rights Act of 1964 and the ongoing challenges of attaining equal rights for all.

The innocent young girl in “Hoodratgurl” is presented without being sliced up or collaged with cutouts, but the title says it all, with its reference to ghettoization (“hood”), dehumanization (“rat”), and a lack of education (“gurl”). Roberts’ powerful show expresses brilliantly the pain and anguish of growing up feeling trapped in a marginalized segment of society. The exhibition is particularly timely in view of the current protests of grand jury decisions taking place around the country.