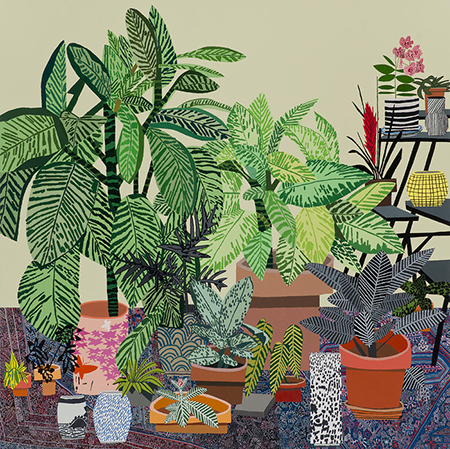 Like all ambitious painters, Jonas Wood demonstrates a debt to his artistic forbearers, but makes his scenes of conventional contemporary domestic interiors, single and group portraits and still lifes refreshingly his own. His flat, geometric shapes, thick lines, and jazzy colors depicting potted plants, sports stars and quirky inhabitants of living rooms and kitchens conjure the work of Henri Matisse and Stuart Davis. The occasional use of thick daubs of paint is reminiscent of Seurat. The slightly off-kilter and disorienting perspective of his vernacular scenes bring to mind the Cubists, striking a middle ground between abstraction and realism. The effect is eye-popping and a little funky. Wood clearly has a great deal of fun experimenting with color and composition. A wall of works on paper, hung salon style, includes studies for the larger works.

The standouts of the show are the seven monumental paintings of “landscape pots” found in the gallery's first room. In these large paintings he pairs a clipping from a plant that appeared in a previous work with a vessel or pot that houses a colorful cityscape or a monochrome garden. One features a cityscape at sunset, while in another two men sit on a bench in a verdant park. “Blue Rug Still Life,” in which nearly a dozen plants in riotous color fill up nearly the entire picture plane, is stunning. Wood's plants may be domesticated, but they are fiercely and brilliantly alive. Wood displays a remarkable ability to reductively render the personal as well as the universal, providing just enough detail so that the images exude emotion and authority without overdoing it (David Kordansky Gallery, Miracle Mile).