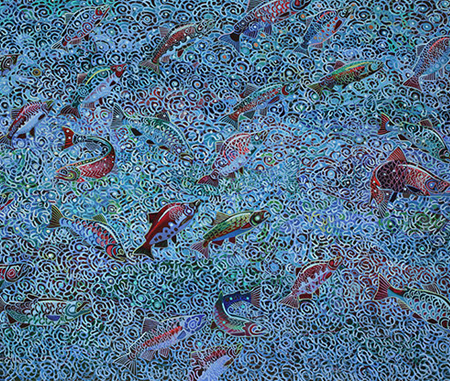 It’s hard to believe that Pacific Northwest artist Alfredo Arreguín is pushing 80. As his newest body of work affirms, the Mexican-born Seattle resident is still going strong. Intricate, lace-like patterns underlie and overlay figurative and landscape scenes combining a signature look and culturally relevant subjects that have been hailed in numerous museum exhibitions nationally, as well as in Mexico, Chile, Spain, France and Poland. Included in all the major Hispanic museum surveys such as “¡Mira!” (1984); “Chicano Art: Resistance and Affirmation” (1990); and “Arte Latino: Treasures from the Smithsonian American Art Museum” (2003), Arreguín’s evolution has also been traced in at least three North American museum retrospectives, the last of which at Bellevue Art Museum in 2002 culminated in a bilingual monograph by University of Washington ethnic studies professor Lauro Flores.

For those unfamiliar with Arreguín’s style, it’s worth noting he has been the subject of a friendly tug-of-war between art critics who place him as either a pioneer (if not the first) practitioner of Pattern and Decoration, a 1970s epiphenomenon, and those who anchor him in the South American literary and cultural revolution known as Magic Realism. The truth is, neither analogy is fully accurate.

Arreguín could never really be part of P & D because most, if not all of, those artists’ imagery was abstract, something Arreguín has never favored. Similarly, novelist Gabriel Garcia Márquez, founder of magic realism, meant it as a blending of Spanish-inspired surrealism and local color. There is no surrealist dimension to the American’s art: it is more about revealing (or concealing) images of historical figures such as Cesar Chavez and Frida Kahlo, not juxtaposing them with upsetting or jarring imagery, as in classical surrealism.

Strolling through the gallery one discovers that ecology, nature and the preservation of the environment now matter more to Arreguín than Latino pop and political icons. The late work confirms the artist’s regional, rather than ethnic, context. Landscape subjects seem evenly divided between local (“La Roca,” “Golden Gardens,” and “Shilshole II”) and exotic or foreign ones (“Sumatra,” “Coyoacan,” and “Birds of Paradise”). Always working from a darkened ground, Arreguín eschews any bright and sunny southern palette for a beclouded, damp water-soaked view, as in “White Water I” and “II,” with their ample Hokusai-like waves, jumping salmon and countless waterborne oxygen bubbles. This liquid presence opens up each canvas and allows them to breathe despite the clogged underpainting. “Birds of Paradise” flutter on branches above and below stylized waves and clouds. “Eclipse” more explicitly quotes the Japanese woodcut artist’s crashing waves, centering them beneath an ominously darkened sky with birds flying above snow-capped peaks. The meadow and beach scenes are further activated by regulated dots, speckled leaves on branches, and the lacy overlays. Normally dynamic, the curvy grid-work can sometimes stall or freeze, as in “Parakeets” and “Caricatura.”

Linda Hodges loves Frida Kahlo; she selected over a dozen Arreguín portraits of Kahlo to flesh out the show. “Frida on Fire” is the only one that is not fulsome and reverent. With flames leaping out from behind her torso, the blue-and-orange palette is simultaneously hot and cold. Could it reference the controversial ambiguities of the celebrated artist’s life, such as her affair with exiled Bolshevik Leon Trotsky followed by her possible collusion in his assassination in 1940 that took place once she and her husband had sided with Stalin? (Her slavish devotion to the tyrant was recorded in a recently discovered illustrated diary complete with self-portrait and an absurdly handsome Stalin looking over her shoulder.) Arreguín doesn’t touch any of this, but rather uses Kahlo as a departure-point for his own oscillating sense of light and space. Her trademark unibrow and haunting eyes become as interchangeable as any Catholic Madonna’s.

“Four Fridas” adds a Warholian twist by multiplying her face. However, each one seems a distinct hair-style, if not personality. Artist, political activist, cult figure and elite art world insider — all could be individual designations of the visages. With the most aggressive patterning of all, the artist has not only pinned her down like a butterfly specimen; he is also imprisoning her within the blue framing devices of her own contested notoriety. Wait. Let’s hope embalming or burying her might be metaphorical strategies, too. Alfredo Arreguín doesn’t need Frida Kahlo any more for people to pay attention to his art. It stands as its own living monument.