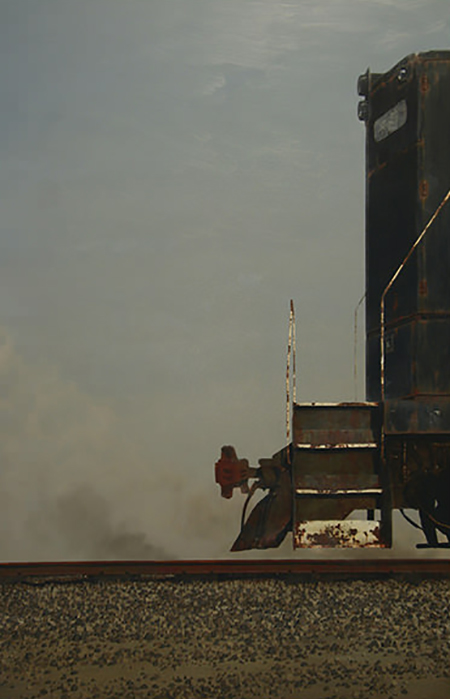 Francis DeFronzo, "The Prospector Arrives," 2014, oil over watercolor and gouache on panel, 49 x 31"

Francis DiFronzo’s ominous "The Earth’s Sharp Edge,” a series of panoramic oil over gouache and watercolor on canvas works, contains the stark realism of the Southern California hinterlands at the edge of the Mojave Desert, where the artist for a time set up a residence in the early nineties. Years later, the artist continues to examine this mysterious and grandiose subject.

This poetic realism depicting the end of the tracks of humanity before the desert envelops all is a testament to the lost dreams of Americana. Broken down buses, abandoned Santa Fe trains, and isolated electrical poles surrounded by the shifting sands and solitary rocks comprise a landscape seemingly absent of mankind and containing only their dark history.

While many landscape painters of the American West choose to depict a sterile or romanticized environment void of man’s aggressive intervention, DiFronzio refreshingly delivers a portrait of something closer to the truth, a condemning testament to timeless places that remain forgotten and unseen.