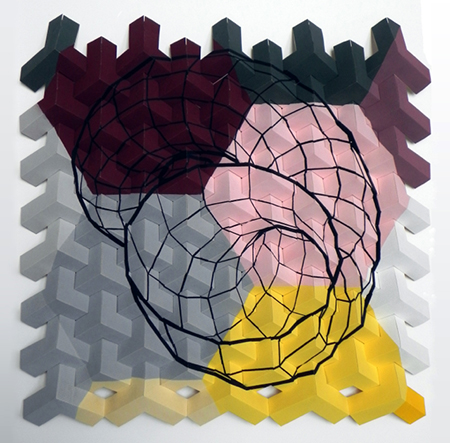 Rusty Scruby’s reconstructions are both astonishing and mystifying. Somehow he transforms flat photographs, drawings, plastic, and even thin sheets of poplar into faceted, three-dimensional wall pieces composed of interlocking geometric shapes. Early on, the artist used vintage family snapshots and his own art photography as raw material, but this show has only three photographic reconstructions; the rest are made from drawings created with pastel, charcoal, enamel and ink.

Scruby’s background, education and interests are as fascinating as his work. He studied music composition and aerospace engineering before settling on the visual arts, and he draws on both in creating his work. He refers to his pieces as “visual frequencies” and writes about “controlling the amount of repetition in the image as it travels across the undulating surface.” The artist grew up knitting and crocheting, and he has continued to experiment with the needle. The image in “Robert,” presented against a black background, is that of an old-fashioned doily created by “tatting.” “68:52 Alphacolor” is similar to a quilt in its composition. “Bloom” suggests the bell of a tuba with an elongated twisting neck, while several other pieces present elements of nature such as tree branches and pussy willows.

The artist cuts apart and reassembles thousands of elements to create his wall pieces, which obviously require remarkable patience and focus. For example, “La Brea” is a photographic reconstruction of images Scruby may have taken while driving along La Brea Avenue in Los Angeles — a stoplight, telephone pole, street sign, car and manufacturing facility — all depicted against a clear blue sky. “Walking Stick” is also composed of photographic images, but that is not immediately apparent from a distance. Closer examination reveals that it is made from thousands of tiny reproductions of the same image that have been cropped and arranged to create the impression that the surface of the piece is rippling and swelling. A complex tessellated form is integrated with numerous patterns, images and designs, resulting in a cohesive body of work based on visual and mathematical relationships. Scruby’s ongoing experimentation with various materials and techniques never fails to produce mesmerizing works of art.