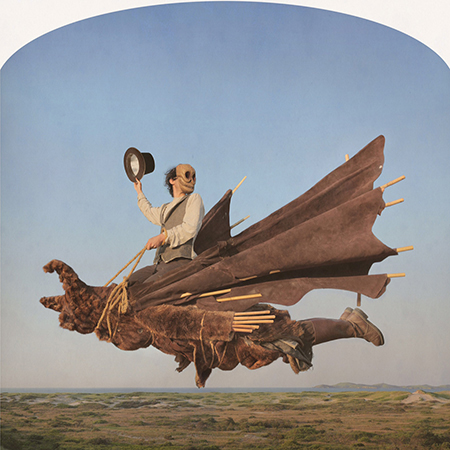 For over 25 years, artist duo Richard Selesnick and Nicholas Kahn have been collaborating on a body of work that includes painting, sculpture and installation, though perhaps the medium for which they are best known is their photography. Narrative and cinematic, Kahn and Selesnick’s photographs frequently feature carefully staged environments occupied by enigmatic, often chimera-like figures, elaborately masked and costumed. With a steampunk kind of “retro-futurist” aesthetic, the duo’s photos read as simultaneously fantastical and historical.

This exhibition, “Truppe Fledermaus & The Carnival At The End Of The World,” contains objects, posters and paintings, with one wall of the gallery filled floor-to-ceiling with photographs. Within a white, domed border, the photos’ subjects are centered in the compositions, making each member of Kahn and Selesnick’s epic cast of characters uniquely iconic. Some characters seem as if they exist entirely in the imagination, like the moss-covered protagonist of “Voyage of Greenman;” others are enacting allegories that are much closer to real life, like the winged, skull-masked figure rising from the wreckage of “Tsunami.” While there is a bit of whimsy present in these works, the more resonant sensation is that of dread, from the suggestion of extinction in “Where the Wild Things Were” to the figure clinging to the craggy cliff side in “Precipice.” Here, Kahn and Selesnick’s photos read as alternately unnerving, alluring and even possibly prophetic.