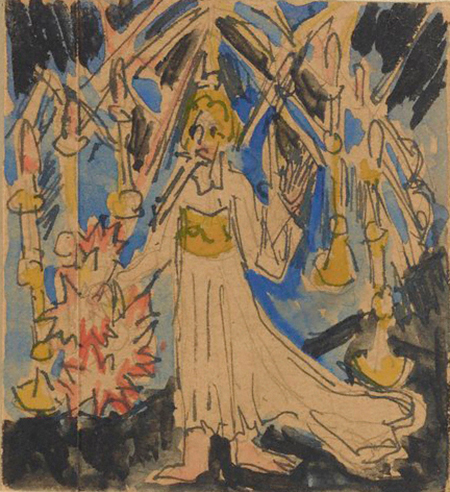 On the centennial of the Great War, “World War I: War of Images, Images of War” presents images and artifacts that contrast the propaganda of the time with first-hand accounts and renderings that recount the reality of battlefield experiences. Drawn largely from the Center’s Special Collections but supplemented by loans, the exhibit is, perhaps, most notable for its inclusion of a good number of graphic and other works by artists who participated in or were close to the conflict. Contributions by George Grosz, Otto Dix, Ernst Ludwig Kirchner, Fernand Leger, Filippo Tommaso Marinetti, Natalia Goncharova, Kasimir Malevich, Max Beckmann and others are included. Also on view are photographs, trench art made by soldiers, illustrations from satirical journals and correspondence from the front. The never-before-displayed diary of Italian Futurist (and enthusiastic war supporter) Umberto Boccioni yields details of the Futurist artist’s introduction to combat in October 1915 as a volunteer in the short-lived Lombard Battalion of Volunteer Cyclists and Motorists, in which he served alongside Marinetti and other Futurists. Less than a year later, after being drafted into the regular army, Boccioni would die from a fall from a horse, the ultimate price for his zeal.

In all, 150 objects are displayed in the exhibit.

One of the declared premises of “War of Images, Images of War”  is that the European powers involved in the conflict took to representing their enemies as threats not merely to themselves but to European civilization in general. The suggestion seems to be that the war propaganda of the time aimed at displacing blame for the evils of a recently consolidated modernity — industrial regimentation, the breakdown of traditional social mores, the relentless drive to expand both markets and sources of cheap labor through imperial conquest — onto caricatures of the national character of enemy states. A cover of the German weekly “Simplicissimus" from October 1914 depicted a pith-helmeted Englishman sliding off a globe awash in red. The visual pun on the color used by map makers to indicate areas then under the control of the British Empire circumvents the fact that Germany was itself one of those European powers most fiercely competing for colonial possessions.

This stratagem of transforming the enemy into a lightning rod for the free-floating anxieties of the moment remains an indispensable tool of contemporary propaganda. It should, therefore, not be difficult for contemporary audiences to discover that some of the inflammatory images on view resonate with recent mass media campaigns to demonize foreign leaders targeted for regime change. In this area, as in so many others, the Great War, far from being “the war that will end war” as H.G. Wells forecast at its outbreak, provided a template for the conduct of succeeding conflicts.

The response of the artists of the time was far from uniform.

The inhuman beauty of the technologies of war mesmerized not only the Futurists but also the likes of Leger, whose glimpse of the breech of a 75 millimeter artillery piece glinting in the sunlight propelled him toward a style of figuration emphasizing the robotic morphology of the body engulfed in the geometric structures and spaces of modern cities.

For others — like Dix, Beckmann, Kirchner, and Grosz — the war was an apocalyptic event that demolished the façade of European civilization to reveal its barbarous underpinnings. One ruefully turns away from the works of the latter with the thought that it was in the repetitive compulsion to imaginatively revisit the horrors of war that Freud located the death drive.