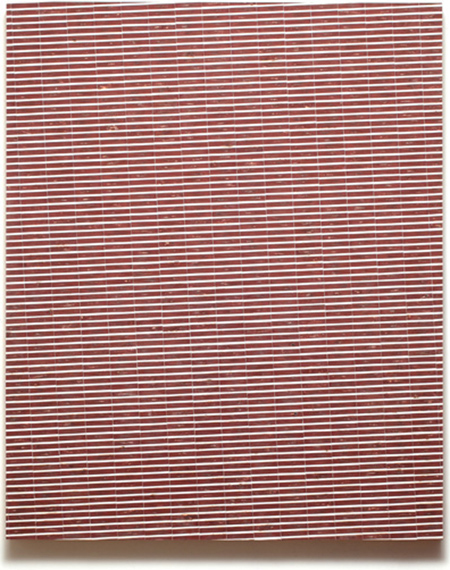 The title, “Luciferos,” means match point in Spanish — the striking end of a match — and Gabriel de la Mora’s new constructions are composed entirely of the striking surfaces of thousands of small matchboxes. These “strikers” contain a dark red strip made from red phosphorus, powdered glass and other materials positioned between narrow white borders. The strips carry a record of the matches that have been struck on them, resulting in burn spots, carbon smudges, scratches and other marks. De la Mora has always incorporated marks referencing the passage of time in his work, and these 12 pieces from the series “Cerillos Cancelados” (Cancelled Matches) extend the practice. In fact, he includes on their labels not only how many used sides of the matchboxes each artwork contains but also the number of matches struck on them. The titles are the number of burnt matches used — “39,675” is made from 1,587 used sides of 793.5 matchboxes upon which 39,675 matches have been struck.


De la Mora describes his studio in Mexico City as a laboratory where he experiments with discarded materials that he collects on daily excursions to the city’s antique shops, bodegas, and markets. “Art is not created or destroyed,” he says. “It is only transformed.” Each new project is the result of a lengthy period of investigation during which he documents every step of his process with drawings and notes. Mora’s process is largely idea-driven, and he develops a new technique and uses different materials for each series.

Long fascinated by the idea of repetitive actions, for “Luciferos,” de la Mora struck hundreds of thousands of matches and cut apart thousands of matchboxes. He then meticulously arranged the red-and-white rectangular shapes into rhythmic patterns of varying complexity — sometimes lining up the stripes and sometimes offsetting them — to create diagonal patterns, parallelograms, triangles and other shapes. The resulting works vibrate with energy from both their figure-ground relationships and the conceptual nature of their creation.