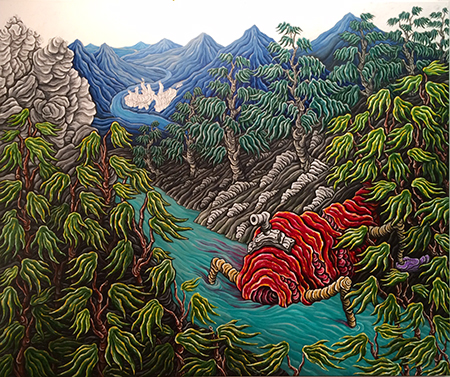 Toyonaga’s immaculately executed ceramic sculptures, mostly small- and medium-scaled, evoke H.R. Giger’s bio-mechanical cyborgs. They often appear half-industrial, half-organic: blob-like orbs on which handles and gears alternate with scales, hair, and bony nubs that wouldn’t look out of place on a lobster. The artist spent many years in semi-reclusion; he made many of these works while holed up in a cabin in the Catskill Mountains. He doesn’t like to talk explicitly about his bizarre subject matter, preferring more general allusions to Surrealist influences, dreams, and the unconscious. While he has shown his work in gallery settings, primarily in New York City and East Hampton, this is his first one-person museum show. It’s a strong, splashy debut.