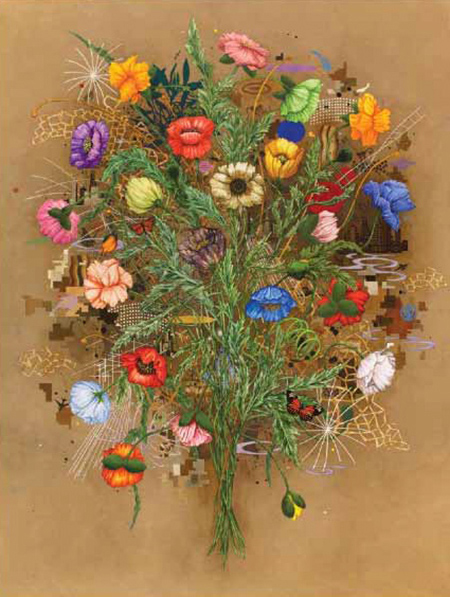 [Note—Reiss will also be featured in a solo exhibition of recent work starting December 11, 2014 at Diane Rosenstein Gallery, Hollywood, California—Ed.]

In this retrospective Roland Reiss emerges as a key figure in the history of contemporary art in Southern California. While the works in this exhibition are readily identified with mainstream styles and concepts — starting with Abstract Expressionism, Conceptualism and other -isms — this is a narrative of an individual who freely explored the changing possibilities of making art without committing to any one. The question is whether we discern an aesthetic core or a rootless wanderer.

In interviews conducted in the nineties with Paul Karlstrom for the Smithsonian’s “Archives of American Art" (“Oral History with Roland Reiss,” August 1997-June, 1999), Reiss’ awareness of and informed interaction with many artists who contributed to the historical narrative influenced the formation of other artists is clear. His eclecticism is undeniable, and his receptivity to new ideas is not arbitrary.

Born in Chicago in 1929 to immigrant parents, Reiss attended Catholic Schools, where he became aware of art and art making. But two schools in particular would be important to Reiss and Reiss to them: Pomona College and UCLA. In 1943 his father, who had already been to California, packed up the family and came west, settling serendipitously in Pomona. The dominant artist in Southern California at the time was Millard Sheets, with whom he became acquainted. Gifted as both a writer and as an artist, Reiss, influenced by a middle school teacher, saw the latter as the better path to earning a living. After all, commercial artists were being hired straight from high school right and left by the Disney studio.

A decade later, having served in the Army at Camp Roberts, and an undergraduate career in Chicago, he arrived for graduate school at UCLA. Studies, teachers, influences emanate from this period, when he also begins to understand the power struggles within the art world. Names abound: in addition to Sheets, Stanton MacDonald Wright, Jan Stussy, Rico Le Brun, Paul Rivas, William Brice, and so many more. Reiss had a ringside seat to the local clash between modernist and regionalist sensibilities. Sheets, the alpha male who had so impressed the teenage Reiss, of course, would ultimately see his influence fade.

But the pat modernist dictum that all regionalism is dated and shabby is a premise that Reiss opposed then and continues to reject. This is key to understanding the artist’s work from its early beginnings to the present. Along with the evolving — indeed shifting — studio practice that is represented by this exhibition, Reiss went on to a distinguished teaching career at the Claremont Colleges in which he exercised an influence on younger peers that only a handful of major artists (Wayne Thiebaud being a prime example) can match. In the end for Reiss, the art and biography intertwine in an essential manner.

In a very real sense, then, the more than half century of practice that this retrospective reflects on is an ongoing response to the historical tension between the cosmopolitan and the reactionary. Indeed it is a major source of the boundless energy that flows through these works. Boundless because there are no boundaries, no a priori limitations, no fitting in to an art world and space structured by or determined by schools, movements, or by the critical authority of gallery owners, critics, curators and museums. Even recalling that now distant world when Los Angeles was no more than a provincial outpost, Reiss insisted on responding authentically to the ideas he encountered without echoing their point of origination. Thus, his works from the sixties were influenced by Reiss’ discovery and exploration of Abstract Expressionism. After writing a seminar paper on the movement, Reiss was asked to present a lecture and actually introduced its then still — at that late date! — radical concept to the UCLA art department.

By the late 60s, the force of the light and space movement found its way into Reiss’ utilization of fiberglass and resin to add the physicality of volume and translucency to his already mature sense of color. "Mister Twister” (1968) is a reddish, iridescent, cylindrical v-shaped object that widens at the top and seems to energetically swirl. “Red Slide” (1968) incorporates the glossy and op-art patterned and textured surface of the fiberglass to heighten the intensity of the turquoise as it meets and fades into the red tones at the top. Such works followed in the wake of then radical aesthetic innovators. Reiss’ academic absorption of these new idioms indicate that if he was then capable of digesting fresh visual language he was not yet sufficiently confident to venture his own vocabulary.

The Plexiglas boxes of the seventies responded to the fresh premises of conceptual art in that they emphasize thoughts made visible through image. But through a decade in which the formal aspects of art were examined through language, Reiss turned instead toward carefully crafted miniaturized dioramas of contemporary domestic life that emphasized its politely hidden horrors. If he drew on conceptualist theory, he ushered it towards a wholly distinct critique that became a breakthrough. By allowing maverick tendency freer reign to embrace the polarized influences to which he had been exposed for years, he was rewarded with his first real burst of public acclaim. The preciousness and narrative complexity of works such as “Easy Turns, Happy Trails: A Murder Mystery” (1975) and “The Dancing Lessons: Unfinished Business” (1977) collided vividly and shockingly (at the time) with the murder, blood, bodies strewn amidst the domicile. These works still retain their capacity to fascinate despite no longer being revelatory to contemporary sensibilities. It would be facile to argue that part of their retained power lies in their anticipation of contemporary film and television scripts to expose the dark side of modern life and to kill off major characters.

By his own account the impulse to engage narrative gradually lost urgency. Following a series of forays into monumentally scaled sculpture and installation that rested too heavily on spectacle that failed to retain the intrigue and urgency of the tableaus, he decided to return to painting. This was his informed response to post-conceptual skepticism that painting could meaningfully contribute to contemporary art discourse. In works such as “Bending Times Arrow” (1992) Reiss builds a rough grid of scraped rectangles on which a pair of abstract figures, unrelated other than by virtue of their side-by-side foreground placement, vie for the eye’s attention. The relative simplicity of such paintings functions as a series of rehearsals, a building new vocabulary of forms that appear to arise more as the product of a somatic than an intellectual process.

Much of Reiss' 21st century work bears this out by virtue of both complexity and craft. In a sense the late paintings that we see here return to the ethos of the dioramas from 40 years ago. Whether the rich, even frenetic layering of paintings on mylar such as “Begin a A End at Z” (2007) or the summarizing representational and symbolic florals such as “Fleur du Mal” (2008) and “Vertical Garden” (2012), the pictorial space is deployed as a field for the eye to wander and discover. Because Reiss retains a vital interest in the polarizing tendencies towards craft and control on the one hand, and receptivity to aesthetic rebellion and skepticism on the other hand, creative risk and vitality are sustained to the present moment. The artist approaches the age of 85 with the kind of youthful energy that is more than enviable but marvelous.