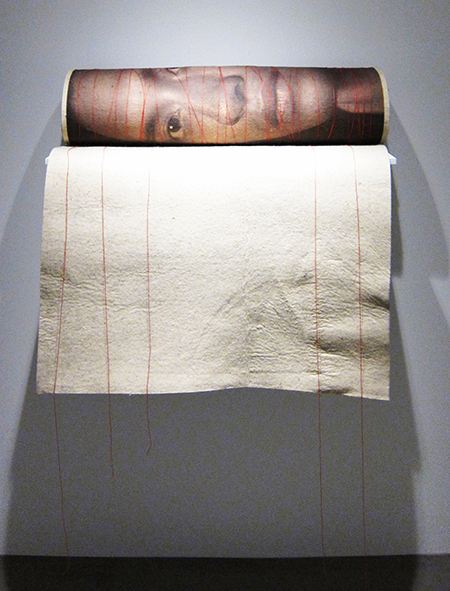 Even when Luis González Palma is diversifying his photography practice away from the intensely composed, sepia-toned portraits of indigenous peoples for which he is famous, he is never far from making you feel like you’ve entered a Gabriel García Márquez novel. This 20-year retrospective of his work includes several spellbinding portraits, including “Las Ventanas de su Vestido (The Windows of His/Her Dress)” (2004), a profile view of a man with chiseled features gazing upward. Not only do the red scratches formed from the application of gold leaf pique your interest, but so does that perfect strip of light that serves as the glint in his eye, compelling you to come up with a narrative for him. Similarly, you feel the magical realism in “Colchoncito” (2004), a diptych consisting of the face of an attractive young woman on one half — her dark hair and the dark background creating an aura around her — and on the other half, a pallet bed seemingly floating above a field.

An experimentation with images is also evident in the artist’s newer “Mobius” series. In the portrait section of the series, geometric shapes applied with acrylic paint manage to both distract from and accentuate the roundness and angularity of his placid models. And “Mobius” (2014) is a mind-bending use of a cylindrical mirror atop digital images of distorted facial features. It’s only by looking at the cylinder that you can see a better approximation of a face. A few other photographic compositions — even though they stray from being portraits — demonstrate González Palma’s flair for the dramatic as well as his versatility.